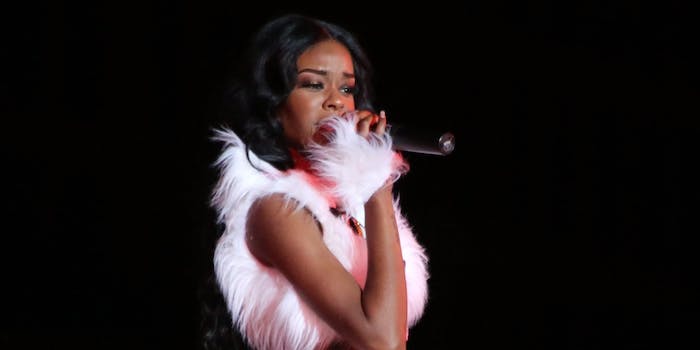 Warning: This video is gross.

Azealia Banks is acting out on social media again, this time with some seriously gruesome footage posted on Instagram Live. The 29-year-old rapper livestreamed a video that appeared to show her digging up the body of her dead cat, before boiling the bones in a pot.

Banks really did have a cat named Lucifer, mentioning him for the first time in an interview in 2011. There’s no evidence that she mistreated the cat while it was alive, but in 2016 she did post a video cleaning up her closet after (supposedly) years of sacrificing live chickens.

People are understandably disgusted by Azealia Banks “cooking” her beloved pet on Instagram Live, although to be absolutely precise, it looks like she’s probably boiling the meat off the bones (sorry, cat lovers!) so she’ll have a clean skeleton left over. Decorating her house with animal skeletons and/or using them in occult rituals sounds like a very Azealia Banks things to do.

On the one hand, this is a majorly shocking thing for anyone to post on Instagram. On the other hand, it definitely fits Azealia Banks’ M.O., as a celebrity who loves to court controversy and rile people up online. She’s certainly staying on-brand.