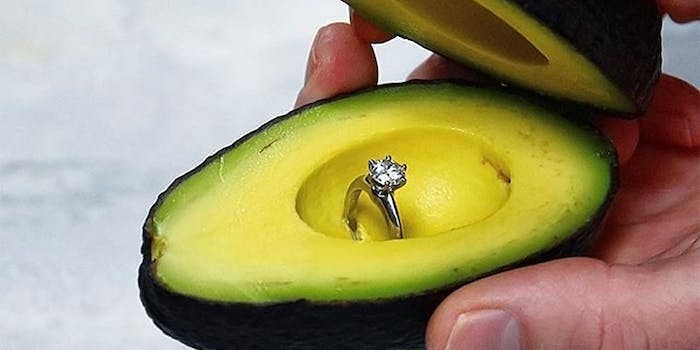 This is the future millennials want.

As everyone knows by now, millennials love avocados. We eat avocado toast instead of buying homes and decorate our holiday trees with glass avocado toast ornaments. Now a handful of people are proposing to their significant other using an avocado as a ring box, and the internet is freaking out.

Yeah…apparently someone decided at one point in time to ask their partner to spend the rest of their life with them using a ring stuck in a piece of fruit. I mean, you do get a free avocado out of this kind of proposal, so it doesn’t sound that terrible.

Today was the first to report on this unsurprising new “trend.” The Cut also reported on it, declaring “We Don’t Need to Make Avocado Proposals a Thing.” It looks like the idea recently took off on Instagram, where an account that posts photos of food styling wrote, “Tag someone who should propose like this.” The post received more than 10,000 likes and dozens of comments—including people who expressed interest in this kind of organic proposal.

In case you’re wondering what an avocado proposal looks like in action, here’s a video of one from last summer:

None of these proposals show what happened to the avocado after the recipient said yes, but one can only hope that the couples put the avocado on some toast and sat down to brunch.