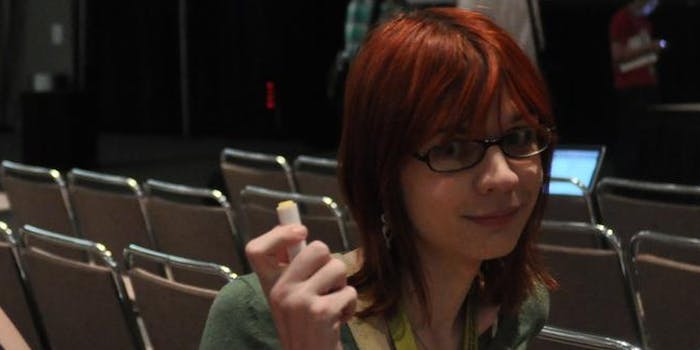 Avery Edison had visa issues, but that's not why she was treated this way.

“Okay, my ride’s here.” The words were innocuous, but they were anguishing for friends of British comedian Avery Edison. They were the last words she tweeted before security at Toronto’s Pearson International Airport escorted her to jail for overnight detainment Monday.

Being detained was bad enough; but Edison, who is transgender, was being taken to an all-male correctional facility, where she would await solitary confinement.

Literally going to jail. Actual jail. Because they don’t know what to do about my junk.

Edison was planning to return to Canada from Britain for three weeks, where she had previously lived with her girlfriend, according to her Twitter account. However, Canadian customs flagged her for overstaying her visa on a previous trip. Although she knew that returning was risky, Edison tweeted about wanting to see her cats and her girlfriend, who was waiting for her in the arrivals area.

Instead, she underwent an ordeal that would last more than 12 hours.

So I think I’m in the process of getting denied entry at Toronto airport. So. That’s happening.

Edison tweeted that she’d already been confined in customs for over six hours, and expected to be sent home.

In addition to being merely inconvenient, this is a humiliating experience that makes me feel like a criminal. Very dark thoughts ATM.

My case is being referred to a hearing. I am being taken to an immigration detention centre. Just been read rights. In washroom crying.

And then they realized she was trans.

Received word I may be kept in solitary because I am pre-operative MTF. Predictable, but still fucking terrifying.

Ever the professional comedian, Edison tried to stay upbeat, jokingly tweeting about how she was to be given a “wet cell.” But as she continued to undergo hours of invasive questioning her frustration was evident.

Initial interviewing officer is telling another about my depression, keeps switching he/she. MY PASSPORT IS FEMALE.

Congrats to Canada for topping the awful experience I had with US customs asking me about “all your surgeries”.

Ugh this is taking too long I just wanna get in my cell and cry in private.

Ultimately, Edison chose to be detained overnight rather than fly home so that she could actually visit with “the two people who waited in arrivals for me all day;”

And because I would like to fight this, because this is wrong. Yes, I messed up, but my treatment has been deplorable.

Throughout the night, Edison marveled at the fact that no one had actually taken her phone away from her during the incident, or realized that she was live-tweeting the entire experience:

Like, c’mon guys, maybe take a break from misgendering me, and search my name and realize I’m telling everyone how awful you are.

Meanwhile, concerned friends tried to get the word out to press and any available lawyers in the vicinity who could help represent Edison, whose follower list ballooned to more than 10,000 horrified onlookers.

I’m so incredibly grateful for everyone’s support. I’m alternating between furious and unable-to-stop-crying. Your messages are amazing.

As Edison was finally carted off to detention, she found the energy for one last snark:

Please keep Toronto Airport customs/immigration officials in your thoughts, as this is apparently their first time meeting a trans person.

Edison’s friend, Twitter user @rahrahtempleton, tweeted updates from Toronto after Edison left the airport, noting that Edison was still seeking a lawyer. Rahrahtempleton also tweeted that she had spoken with the British consulate and was on her way to see Edison at the detention center.

.@aedison Apparently the words “human rights lawyer” gets you transferred to the only person at Maplehurst that doesn’t misgender.

.@aedison But, was still informed that Ontario law requires everyone with male genitalia to be placed in a men’s prison -that can’t be true?

But shocking as the idea might seem, the question of placement is just one of many obstacles that trans individuals face when they encounter the prison system. A 2006 study published in the Tulane Journal of Law & Sexuality found that for Australian, U.S., and Canadian prisons, “A primary concern that prison administrations must take into account when determining placement is whether or not a transgender prisoner has undergone sex reassignment surgery prior to incarceration.”

In other words, since Edison was a pre-operative woman, there was little precedent for placing her in a women’s correctional facility, even just for an overnight stay.

With trans offenders comprising less than 1 percent of Canadian prison populations, Canadian officials have little pressure or impetus to rethink the way they identify and place trans individuals.

As grueling as Edison’s experience was, ultimately there might be one thing for which she can be grateful: She only has to stay one night.

Update: Edison will be held overnight and then return home, and she has the possibility of entering Canada again in the future with “a lot of red tape,” according to a friend who is currently running Edison’s Twitter account.

Just to clarify, Avery will continue to be detained at the Women’s facility for one more night until her flight out. -RR