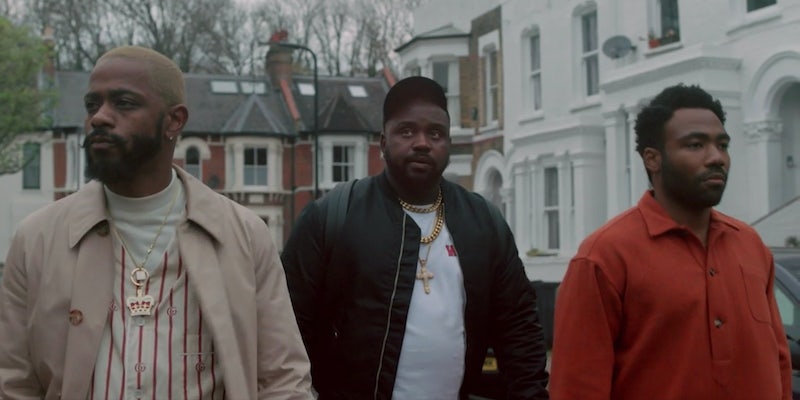 Review: Atlanta season 3 is sure to be a trip

Returning for its long-awaited third season, Atlanta helped close out the 10-day-long South by South West (SXSW) festival in Austin on March 19.

Donald Glover’s popular FX series has been off-air for roughly four years, as the pandemic delayed both the third as well as fourth and final season. Saturday night truly felt like a return to normalcy as the majority of SXSW was held in-person for the first time since the pandemic began, and as Atlanta, one of the 76 world premieres to be featured at the festival, made its return to the screen.

The first two episodes of season 3 premiered at SXSW, and they were followed by a Q&A with several of the show’s cast and creators. During the Q&A portion of the premiere, Glover addressed the show’s extended absence.

“There was a pandemic. I feel like everyone rushes to make the next season, and we were like, ‘Fuck that,’” he said. “We felt like if you make classic stuff, then time doesn’t touch it.”

This review contains spoilers for season 3.

Both the third and fourth seasons were jointly written and filmed. The third season is mostly set in Europe as characters Earn (Donald Glover), Alfred/Paper Boi (Brian Tyree Henry), Van (Zazie Beetz), and Darius (LaKeith Stanfield) are touring the continent.

The season 3 premiere, however, does not pick up where season 2 left off, instead opting for a standalone storyline. The episode was based on the Hart family murder-suicides. In 2018, Jennifer and Sarah Hart intentionally drove their six Black, adopted children off a cliff, killing them. Glover said he wanted to give the story a “better ending,” so all the children in the episode (there were four rather than six) escaped the car unscathed.

The episode follows a young boy named Loquareeous, who gets in trouble after breaking into a celebratory dance after learning his class is going to see Black Panther 2. A well-meaning white faculty member vows to save Loquareeous after his parents force him to Nae Nae and slap him three times as punishment (hence the episode’s title, “Three Slaps”). Loquareeous is essentially failed by the system, getting placed in a home with two white women who do things like make their four Black foster kids work in the garden and rename Loquareeous “Larry” since his actual name is hard to spell. The story ends when the women drive off a cliff, only to learn last-minute that the kids escaped from the car and that only they and their dog are going to die.

Glover admitted the decision to start the series this way was an unpopular one among the creators.

“No one liked that decision,” he said. “What can we do that other [shows] cannot do? Let’s show [viewers] how engaging we can be. That was it. We’ll just tell a good story. That episode is based on something that actually happened. And we were like, ‘What would happen if [the children didn’t die]. We thought it was a more enjoyable story.”

At the very end of the episode, viewers find out the storyline occurred in Earn’s dream, and the show returns to its ensemble cast in the second episode after he wakes up.

In that episode, Earn is helping prepare Alfred for a big show in Amsterdam in the midst of the holiday season, when many Dutch people wear blackface to portray a character called “Black Pete,” or Zwarte Piet, who supposedly got soot on his face after falling down a chimney while acting as Santa’s helper. “Sounds like Santa’s slave, but I respect the rebrand,” Earn says after learning the tale. After fans show up to Alfred’s concert in blackface, he refuses to perform, and Earn, while supportive of it, is left to deal with the fallout of this decision.

In the Q&A, Glover explained this is something they actually witnessed during filming.

“When we were there, we saw it. We were like, ‘Oh that’s kind of weird; that’s kind of strange.’ They weren’t throwing rocks at us and shit. They just thought it was part of their culture.”

Glover said that when they questioned locals about the tradition, they either had one of two reactions: “Some people were like, ‘No it’s a good thing’; other people were like, ‘Yeah, it’s kind of fucked up but [we do it for] the kids, the kids.’”

Stephen Glover, Atlanta writer and producer as well as Donald Glover’s brother, teased in an interview with the Hollywood Reporter that season 3 will “put some more women on the screen.” So far, the only female lead has been Zazie Beetz, who portrays Vanessa “Van” Keefer and has had one episode dedicated solely to her character’s storyline in the series’ first two seasons. Beetz has since gone on to star in The Joker and The Harder They Fall but returned for Atlanta’s third and fourth seasons. In the second episode, Van touches down in Amsterdam to join the rest of the group. But she seems to be having an identity crisis, describing herself as “aimless” at one point.

“What I really appreciated about her in this season, I do think is a reflection of anxiety and thoughts we’ve all had,” Beetz said during the Q&A portion of the event. “I do think she has a phenomenal arc in this season. … For her, her battle has often been finding her identity outside of being a mother, outside of just being Earn’s partner…Who is Van?”

In episode 2, “Sinterklaas is Coming to Town,” Van finds an address in a coat while shopping, and, after being egged on by Darius, she follows it to a house, stumbling upon a group of people donning all white. They bring her to a celebration of sorts to help their supposedly dying Black friend pass on. Van comforts the man, telling him it’s OK to let go, without realizing that she is about to bear witness to his very public euthanasia via suffocation.

When asked during the Q&A what this scene was all about, Glover’s response was pretty straightforward. “We’re just fucked up people,” he said.

The closing night headliner was preceded by an activation, “The Trip: An Atlanta Café,” which saw Austin’s cocktail bar Higher Ground be transformed into an “immersive pop-up.” Fans of the show were encouraged to attend the event at 4:20pm to get the most out of the “psychedelic experience,” aimed at celebrating and previewing—through easter eggs—the show’s upcoming season. The activation was, in part, inspired by Amsterdam cafés, also known as “cannabis cafés.” Attendees were met with free drinks (most of the attendees at the press preview on March 11 opted for espresso martinis) and merch consisting of posters, coffee, and tote bags. Atlanta has never shied away from experimentation, going so far as to make Justin Bieber Black in season 1. Among the oddities seen throughout the event were a person dressed as a kinky Dalmatian behind the second-floor bar and a slew of misshapen cafe-like chairs and tables on each level. If the activation really did capture the essence of season 3 like it promised, it’s sure to be a trip.

Atlanta is slated to return March 24 at 9 p.m. CT on FX. The first two episodes will air consecutively and will be added to Hulu on March 25.