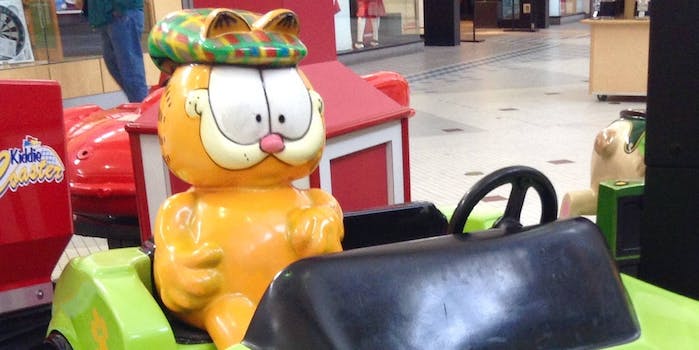 Troll takes over #AskGarfield by posing as cat’s official account

War of the Garfields.

Every day is a holiday if you buy into the bullshit calendar of festive food days. Today it happens to be national lasagna day—cause for celebration among Italians and Garfield enthusiasts alike.

The latter group certainly got their kicks when everyone’s favorite fat cat decided to participate in a Twitter AMA, care of the #AskGarfield hashtag.

. @Bazookles I wouldn't smash Odie. I WOULD smash lasagna. #ASKGARFIELD

. @stephluxenburg A lot of people want me to say lasagna here but that isn't true. The real answer is Jon Arbuckle's tears. #ASKGARFIELD.

. @Bazookles Trick question. Jon's been dead to me for years. #ASKGARFIELD

Pretty revelatory shit right there. The only problem is, @joeytainment isn’t “official” anything. But the account began tweeting strictly Garfield content just five hours ago. Before that, between a smattering of comedy tweets promoting a wrestling podcast and retweeted photos of cats, @joeytainment would occasionally post random Garfield facts such as “Garfield has a friend named Odie” and “Garfield is a cat.”

Step aside. The real fat cat is in the building.

Don't listen to them. They are clearly a troll account.

This brief beef hasn’t deterred @joeytainment from answering more pressing questions about Garfield’s eventual presidential run and more. For those seeking a side of bizarre with their carb-heavy meal, @joeytainment is a fantastic alternative to the frankly tired out gimmickry of Garfield.

Be honest, would you rather find out about cotton swabs?

All your burning questions like "Who invented the cotton swab?" answered at 11:30 CDT today #AskGarfield. pic.twitter.com/XOiyugNdiv

Or would you rather see creator Jim Davis lose his shit over Nermal’s origin story?

. @mattlieberman @Denisse__Ojeda Nermal and I are not related and if anyone says otherwise I will take them to court. – JD #askgarfield