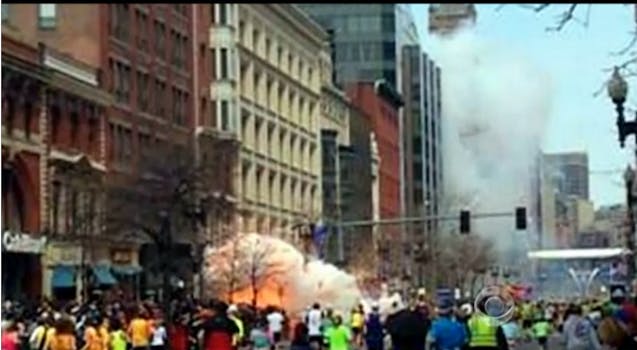 Arrest made in Boston Marathon bombing? CNN backs down

After two days of nonstop Internet speculation, CNN's John King announced that an arrest was made in the Boston Marathon bombing case.

After two days of nonstop Internet speculation, CNN’s John King announced that an arrest was made in the Boston Marathon bombing case. The Associated Press cites a law enforcement official to report that the suspect is in custody. By 2:30pm ET, CNN was backing down as Boston Police announced no arrest was made.

The suspect was ID’d based on two independent videos. Some of the footage, which allegedly shows a person placing a black bag near where the blast occurred, came from surveillance cameras in a nearby Lord and Taylor. CBS News tweeted a (vague) description of the suspect: “JUST IN: Man sought as possible suspect is WHITE MALE, wearing white baseball cap on backwards, gray hoodie and black jacket.”

The FBI will hold a press conference at 5pm ET.

NBC News and CBS share a conflicting report: No arrest was made. The Boston Globe, however, confirms CNN’s report.

Redditors and 4chan users alike flocked to their respective forums this week to pore over photos of the explosions, ID’ing a number of people whose backpacks or proximity to the crime scene seemed suspicious.

Meanwhile, Boston Marathon runners organized online to finish the race; Marathon organizers promised the run would continue as planned in 2014.

Update: 7:05pm ET: The scheduled FBI media briefing has been postponed. No new time has been set for an announcement. CBS reports that investigators are considering releasing a photo of a Boston bombing suspect, but will not do so tonight.