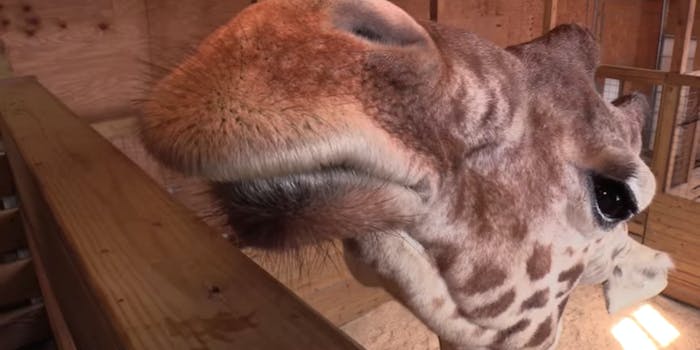 April the giraffe, who found viral fame in 2017 after millions tuned in to watch her give birth live, is reportedly dead at 20.

April, an 18-foot-tall giraffe, was euthanized due to arthritis, the animal park she was being held at, Animal Adventure Park, announced on Facebook.

“It is with the heaviest of hearts that Animal Adventure Park announces the tremendous loss of our beloved April the Giraffe. Euthanasia was carried out at April’s home in Harpursville this morning, due to her worsening arthritis, in accordance with the recommendations of her veterinary team,” the New York zoo wrote on Friday. “April’s most recent veterinary exam identified the acceleration of April’s condition, prompting the determination that euthanasia was the humane and appropriate course of action.”

It also detailed what “accommodations were made and treatments performed” to keep April “comfortable and prolong her life while managing her condition” over the past year.

The live stream on YouTube was reportedly being watched by 1.25 million people at the time of Tajiri’s birth, and it saw more than 232 million viewers during the seven weeks beforehand, prompting April’s giraffe cam to become the second most live-viewed YouTube channel at the time.

“Since then, April has been one of the world’s most famous animals, and in turn, has made a profound impact on giraffe conservation, education and appreciation,” the zoo said in the post.

April’s body will undergo necropsy at Cornell University Veterinary School before it is cremated, according to Animal Adventure Park. April’s ashes will the return to the park, where she lived for nearly six years, according to CNN.

“We grieve with her many fans, near and far, as we say goodbye to the giraffe that can be credited with making a foothold for giraffe and giraffe conservation awareness in the 21st century,” the post reads. “While her hoofprints in her yard will erode in time, the imprint she has made on the hearts of people around the world will never fade.”