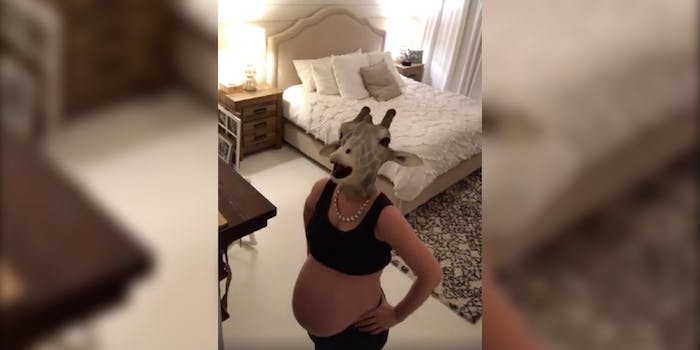 Good news, everyone: April the giraffe has given birth!

But by April we mean Erin. And by giraffe we mean a woman wearing a giraffe mask.

On Wednesday, a South Carolina woman whose viral Facebook Live video of her traipsing about her room in a giraffe mask gave birth to a human baby boy.

In a Facebook photo announcing the birth, Erin Dietrich donned the mask while nursing her newborn. The caption reads, “Our sweet Porter Lane arrived at 6:11pm tonight… Our hearts are overflowing. Thank you so much for ALL the love and prayers!”

He's here!! He is perfect, healthy and just beautiful! Our sweet Porter Lane arrived at 6:11pm tonight. 8lb 2oz and 21…

Dietrich became a viral sensation earlier this week when she hosted an eight-minute Facebook Live stream of herself pretending to be April, the 15-year-old pregnant giraffe at Animal Adventure Park in New York that tens of thousands have been watching in anticipation of her newborn.

Despite all the attention, April hasn’t done much in the weeks leading up to her calf’s impending birth. But that hasn’t stopped Dietrich from being just as obsessed, to the point where her friends have even made fun of her wonder with April, she told news station Fox 13.

So, like any other pregnant woman wanting to show solidarity with a world-famous giraffe, she ordered a giraffe mask from Amazon and put on a similar show herself. In the livestream, Dietrich mimicked April’s casual vibes while walking around her room, sitting in her chair, and doing a few jumping jacks.

Since Dietrich went live on March 5, the video has gained more than 30 million views.

Less than four days later, Dietrich now has a baby boy to show for all that laborious pacing and gawking. Now if only April’s calf would come just as quickly.