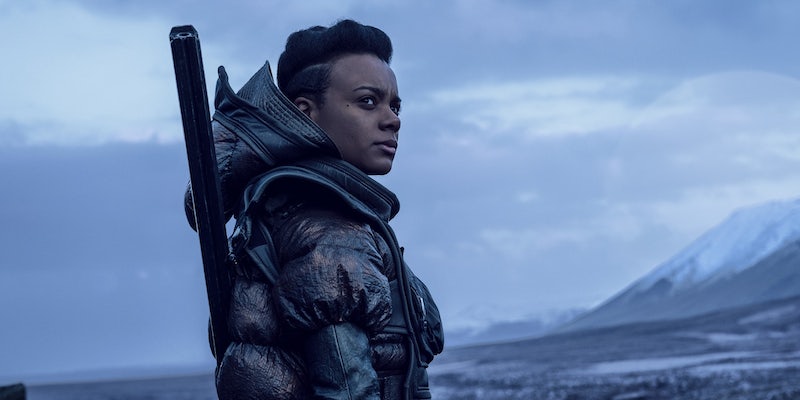 My favorite symptom of the streaming wars is the glut of expensive sci-fi/fantasy shows with dubious mainstream appeal. While Game of Thrones‘ popularity was easy to understand (it’s a horny, action-packed soap opera), dramas like Raised by Wolves, Carnival Row and Amazon‘s upcoming Wheel of Time are more obviously aimed at nerds. And since streaming services rarely publish their viewing data, we may never know if this genre gamble paid off. Apple TV’s Foundation might be the pinnacle of this phenomenon: A gorgeous, overcomplicated Isaac Asimov adaptation about the collapse of an empire. It won’t be a ratings hit, but it certainly drew me in.

RELEASE DATE: Sept. 24, 2021
CREATOR: David S. Goyer and Josh Friedman
STREAMING: Apple TV+
Adapted from the books by Isaac Asimov, this epic series explores the collapse of a galactic empire. Its worldbuilding can be overly elaborate, but with gorgeous production values and a compelling cast, it’s sure to find an audience of sci-fi fans.

Adapted from a sprawling series of interconnected stories, Foundation hinges upon the predictions of mathematician Hari Seldon (Jared Harris). According to his calculations, the Galactic Empire will collapse over the next few centuries, spawning a dark age lasting 30,000 years. This prediction marks Hari Seldon as a political dissident against the Empire’s ruling triumvirate of tyrannical clones. You see, the empire has long been ruled by genetic copies of Emperor Cleon, always three at a time: Brother Dusk (an old mentor played by Terrence Mann), Brother Day (a decisive leader in his prime; Lee Pace), and Brother Dawn (a young apprentice played by Cassian Bilton). They cycle through the generations, an immortal dynasty of unending rule.

While the story kicks off with an ideological clash between white men, showrunner David S. Goyer (known for less intellectual projects like Batman v Superman) made sure to diversify Asimov’s vision, casting women of color in the most compelling roles. While Seldon and the Cleons are key figures, the story is driven by Hari’s protégé Gaal Dornick (Lou Llobell) and a tough planetary colonist with a mysterious superpower (Salvor Hardin, played by Leah Harvey). They’re among several characters who were gender-flipped from the original text. The writers also do their best to hammer the source material into a coherent narrative; an uphill battle given the show’s plan to cover 1,000 years of history.

Merely in season 1, Foundation spans an unusually long timescale. We begin with Hari Seldon’s apocalyptic prophecy, demanding a major suspension of disbelief. In real life, governments still ignore the immediate threat of climate change. Foundation wants us to believe that Seldon’s predictions (which talk about stuff happening in thousands of years!) can start a revolution. We get just enough time to accept this idea before the show jumps decades into the future.

From here we focus more on the titular Foundation, a group of academics who colonize the remote planet Terminus. They want to preserve human civilization through the impending dark age, inspiring absurd debates like, “Which technology should we keep: The sundial or the water clock?” The most important figure here is warden Salvor Hardin, a pragmatic young woman who patrols the settlement’s borders.

Needless to say, Foundation offers a very elaborate narrative. Episode 1 is a bit of a struggle; an expository prologue that emphasizes spectacle over emotion. It doesn’t help that as the decades progress, the three Cleons become a different three Cleons, played by the same actors in a new configuration of clones. But by the halfway point of this 10-episode season, I was hooked. Foundation may not have a traditional structure, but the down-to-earth elements (Salvor Hardin’s adventures; Brother Dawn’s uneasy coming-of-age) balance out the more ambitious philosophical storytelling. That’s where the gargantuan budget comes into play.

Production designer Rory Cheyne (American Gods) and costume designers Kurt and Bart (the Hunger Games franchise) created some awe-inspiring sights for Foundation, from the grimy Terminus colony to the opulence of the imperial palace. Feuding priestesses light ceremonial fires atop a desert fort. Lee Pace, hamming it up as an egomaniacal tyrant, gets to wear a terrific royal blue gown. The special effects are exquisite, and you get hints of deep, unspoken lore on planets shaped by extreme climates and ancient architecture. My only criticism is that Foundation sticks too close to a stark grey/brown color scheme. With this many locations in play, you need a more obvious visual contrast between settings.

Contrary to Asimov’s reputation for dense, academic sci-fi, Foundation feels equally close to the fantasy genre. Much of the plot is driven by religion, with Seldon’s predictions crossing a line between math and prophecy. Politically speaking, some of the casting choices seem allegorical. The imperial court, a seat of decaying inherited power, is led by white people. Meanwhile, the relatable heroes are Black women from poor backgrounds, achieving great things due to their skill and intelligence. Later on, T’Nia Miller and Kubbra Sait arrive to play two very different leaders who rise up against the Empire. Some of these roles overlap with problematic archetypes, but they’re compelling characters nonetheless, and the story avoids direct references to real-world politics. The central conflicts are more abstract: The Emperors’ desire to protect their dynasty, the Foundation’s quest to preserve human history. Gradually, we begin to see how these interlocking factors will contribute to the collapse of civilization. No empire lasts forever.

Far too many shows “take a while to get going,” but if you make it through to episode three or four, Foundation holds a rare appeal. While it includes plenty of familiar tropes (space pirates; planetary colonies), it’s also the kind of high-concept storytelling that rarely makes it to TV. A genuine big-picture drama based on values that we, as mere Earthlings, don’t necessarily need to understand.