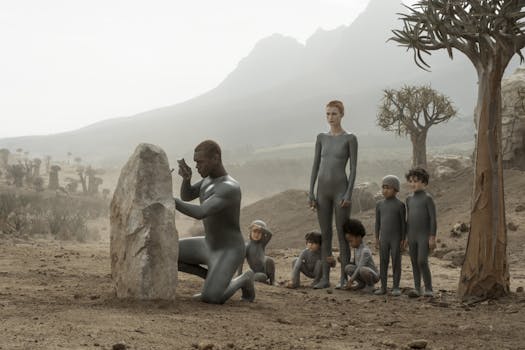 Unfolding slowly on a desolate alien planet, Raised by Wolves has one of the best introductions I’ve seen in a while. Two androids named Father (Abubakar Salim) and Mother (Amanda Collin) emerge from a sleek little spaceship, tasked with building a colony. A pod of six human embryos are plugged into Mother’s torso and brought remotely to term, while Father builds a rudimentary settlement from nearby rocks and trees. Father is friendly and likes to crack jokes, while Mother is subtly threatening, speaking with an eerie musical cadence. They both have the stilted mannerisms we’re used to seeing from sci-fi androids, but not to a degree that feels annoyingly clichéd. With no other role models, will these kids understand how strange their parents are?

RELEASE DATE: Sept. 3, 2020
CREATOR: Aaron Guzikowski
STREAMING: HBO Max
Echoing ‘Alien’ and ‘Battlestar Galactica,’ this epic drama brings religion and sci-fi together with a hint of horror, set on a desolate planet that humans are attempting to colonize.

This slow burn of everyday life invites us to consider certain questions. Why is the set-up so heteronormative, with a gestating female “mother” and a male “father”? Wouldn’t it be easier to have three or more caretakers, given the difficulty of raising six kids on a planet full of poisonous plants and giant sinkholes? But of course these androids were built by humans with human biases. Their unknown creator envisioned them as a new Adam and Eve; a choice that soon feels rather ironic. Other details may say more about the unexamined flaws of the show’s own creators, like the potentially troublesome subtext of Father (who is Black) being a “service model” while Mother (who is white) is more powerful. It’s hard to say more without entering spoiler territory, but both characters have thoughtful, nuanced roles.

Raised by Wolves‘ gradually-developed worldbuilding is a real gift compared to the many sci-fi shows that infodump at the first opportunity, or succumb to meandering mysteries like Westworld. It feels a lot like reading the first act of a really epic sci-fi novel like Dune, not least because we see some of the story through the eyes of Campion (Winta McGrath), one of the six children.

Raising the children to be pacifist, practical-minded survivors, Father and Mother were given one very specific instruction: the colony must build an atheistic society. This is our first hint of what happened back on Earth: an apocalyptic war between atheists and Mithraics. Loosely referencing the Roman cult of Mithras, they’re an analog for modern Christian extremism. A monotheistic religion that believes in sin and divine punishment, uses scripture to guide their choices, and follows a hierarchy with predominantly male leaders. Meanwhile, the androids teach their children to be rationalists and to view faith as a weakness. In other words, a very Western vision of what religion and atheism represent, which is fair enough because it’s an American show.

Created by writer Aaron Guzikowski, Raised by Wolves was heavily advertised as a Ridley Scott project, the kind of big-name credit that I usually take with a pinch of salt. In this case, though, it feels accurate. Executive producer Scott directed the first two episodes, and many of his recurring themes are woven into the show: quasi-biological superhuman androids, unsettling ideas about reproduction, epic religious conflicts, etc. There are definite hints of the underrated Alien: Covenant here, along with the moral questions about android personhood in Blade Runner.

The production design is also fantastic. Father and Mother preside over a rugged stone-age settlement, creating sparse beauty in the spiral furrows of their farm, and the conical design of their granaries. When a Mithraic colony ship arrives on the same planet, the aesthetic clash is pleasingly extreme. Dressed in armored robes that fall somewhere between medieval crusaders and mid-20th-century comic book art, the humans seem both more and less advanced than the two androids.

Continuing the theme of dubious parenting, Father and Mother have human counterparts in the form of our two Mithraic leads, Marcus (Vikings star Travis Fimmel) and Sue (Niamh Algar), whose intriguing backstory I will not spoil. They have a son the same age as Campion, a subdued boy named Paul (Felix Jamieson). Both brainwashed by opposing sides in the religious conflict, Paul and Campion receive some of the best writing in the show, driven by child-logic and emotion. The power struggles between the adults are more straightforward.

With an atmospheric, atonal score by the brilliant minimalist composer Ben Frost (Fortitude, Netflix’s Dark), Raised by Wolves is a goldmine if you enjoy menacing androids, ominous monoliths, and unpredictable, well-characterized storytelling. I was certainly thrilled by the sense of sheer alien-ness in the show’s first act. But by the time I got halfway through the season (six of the ten episodes were available to critics), things had settled into a more familiar—and less compelling—rhythm. The focus shifts to a conflict between the two factions, but there’s less time to explore than with Battlestar Galactica—a show with similar ideas and a much simpler introduction. Mother’s role also falls foul of some rather tiresome tropes about female androids, although she’s otherwise a very effective blend of scary and sympathetic.

While it doesn’t quite live up to the unearthly promise of its earlier episodes, Raised by Wolves is a gripping blend of sci-fi, horror and fantasy drama, showcasing a talented cast of lesser-known actors. The writing is unusually thoughtful and well-paced, allowing us to digest an ambitious tale with epic scope and immersive visual design.

Raised by Wolves premieres on HBO Max on Sept. 3.