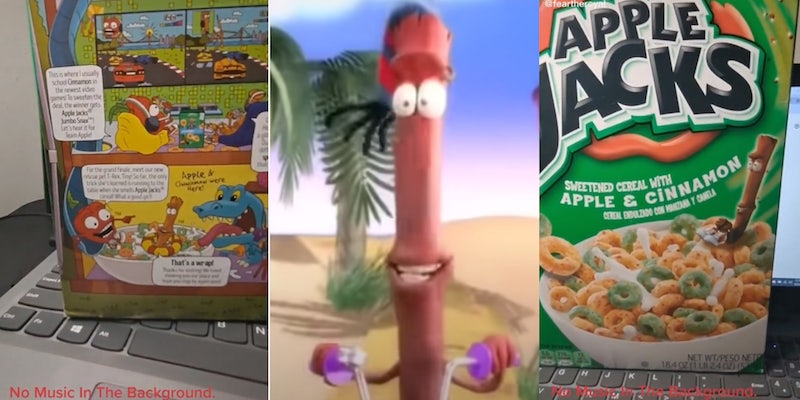 ‘When did they cut his dreads?’: Beloved Apple Jacks mascot CinnaMon loses his dreadlocks—fans are furious

'He was the best part of the ad cause he was chill and the apple wasn't.'

With the Crown Act having recently passed the House, the U.S. is moving toward banning hair-based discrimination in the workplace for good. So why did the Apple Jacks mascot lose its dreads?

A viral TikTok video posted this week, created by @feartheroyal, shows a new box of Kellogg’s Apple Jacks cereal mascot completely without its signature dreadlocks. You can hear @feartheroyal’s commentary in the background: “When did they cut his dreads?!”

The video has grossed over 632,300 views and 151,600 likes. There are also more than 7,000 comments of viewers expressing their thoughts on the missing dreadlocks of the cinnamon stick mascot.

Kellogs Removes Cinnamon’s Dreads! For those who couldnt hear the first video, I am not a tiktoker, still learning.

“Yup! He was the Cinna Man…man with an accent. He was the best part of the ad cause he was chill and the apple wasn’t…till they became friends!” commented @zxmegamanfan, receiving 23,800 likes.

“Yes he did and a Rastafarian hat,” agreed @leahcouturebaer.

It is unclear why the Kellogg’s brand decided on the sudden change of the look of the Apple Jack’s cinnamon main character, but it takes away the features many cereal fans looked forward to in buying a box of the Kellogg’s brand.

Introduced in 2004, CinnaMon was a “carefree Jamaican cinnamon stick” but recently, his “iconic beanie and dreads” have been removed and his name has been changed to just “Cinnamon,” “likely due to concerns of racial stereotypes,” notes Wikipedia.

Other viewers like @talonheart believe the parent company, Kellogg’s, is playing the “safe card” with this move.

“It has probably fallen victim to ‘safe’ advertising. I have seen a lot of companies subtly change their mascot or label out of fear of being canceled,” commented @talonheart.