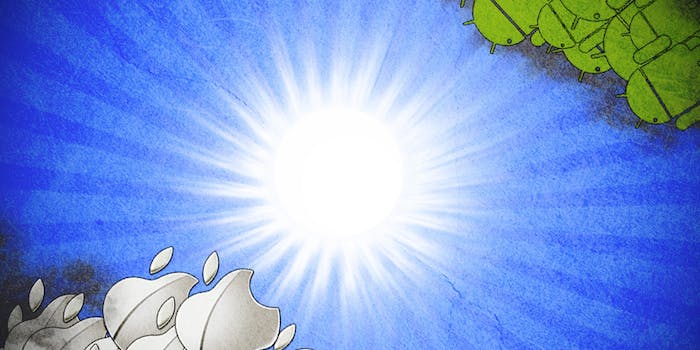 There can be only one.

Coke versus Pepsi. Star Wars versus Star Trek. And, of course, Apple versus Google. The next war over consumer loyalties is a big one, and it’s tearing the Internet apart. As the two companies vie for market share and supremacy, attempting to pin their users down to an exclusivity contract to rival Comcast’s, they don’t seem to be considering the risks of upsetting their public—is there a point when the two might go too far?

News broke this week that Yahoo is trying to edge in on Google’s exclusive deal with Apple, which currently uses Google as the default in Safari, iOS, and many other products. The search giant’s contract is about to expire, and Yahoo is ready to swoop in—it’s already managed to do so on Firefox, and the company is renegotiating similar terms at Microsoft as Sheryl Sandberg leans in hard with her attempt to dominate the search engine business.

Being served up as the default search engine doesn’t just inspire brand recognition and loyalty for Google. It also generates massive advertising revenue, thanks to the fact that the Apple demographic tends to be wealthier overall and highly technologically engaged. Yahoo’s salvo in the search engine wars in a reminder that while the war may have faded from the minds of many observers, it’s still going strong, while Yahoo attempts to make itself relevant again.

If Yahoo’s mission succeeds, it’ll push Google out of a lucrative agreement with Apple, but Conor Dougherty at the New York Times reports that losing the contract might not have a big effect on the company’s finances. “Carlos Kirjner, a senior analyst at Bernstein Research, estimated that in the worst-case scenario Google’s 2015 per-share earnings would be reduced by 6 percent from what they otherwise would have been,” Dougherty says.

But the search engine wars pale in comparison to the epic battle between Apple and Google, the Tyson versus Holyfield, Ali versus Liston match of the century—and no one’s going home until someone loses an ear. The fallout will determine the future of tech and it stands to shape the very way we interact with our homes, our vehicles, and each other.

Apple and Microsoft have long been duking it out—who can forget the ridiculous Mac versus PC ads?—but Google didn’t emerge as a serious threat on the scene until it started to take the game beyond search engines and apps. When the Silicon Valley heavyweight expanded into hardware, things got real, especially when it announced that it would be running its own operating system, Android, on phones, tablets, and notebooks, licensing the OS to other firms like Samsung and avoiding the costs of developing, testing, and building its own hardware products. With the expansion of Chrome and its suite of products, Google captured users at almost every level of the market, doing exactly what Apple had been hoping to do. But it still had fans to win over.

“While Google may be innovating more than Apple currently and working to make tech integration more seamless with services like Google Now, that’s not yet selling point for average customers,” notes Conner Forrest at Tech Republic. “The fact of the matter is that Apple has established itself as a trusted brand, it has created a product that is a status symbol to own, and it prides itself on the ease of use of its products.”

One launches a smart watch, and the other follows suit. One upgrades its browser with innovative new features, and so does the other. The two firms are determined to outdo each other, and to extend their sphere of influence, with acquisitions like Nest (Google) and Beats (Apple); over time, it’s clear that both companies want consumers to turn to them with every possible need, from getting to work (in a Google self-driving car) to improved voice recognition (Apple). Competition is the heart of capitalism, but it might not be good business, because if you push consumers too far, they push back.

With every push and pull in the fight between the two companies, there’s also a corresponding push on consumers as they vie for brand loyalty. For some consumers, it works—Apple and Android fanboys alike can be found in plenty. For others, though, there’s a risk that these divisive tactics may fail—and blow up spectacularly in the faces of their architects.

In this sense, the dispute over search in Safari provides an illustrative example. Apple wields the power in this situation, with a contract decision that could play a major role in at least one search firm’s future. While it’s not likely to pick up Bing as its default engine, that’s not going to stop Microsoft from trying, and Siri already turns to Bing when she can’t answer questions on her own. Google and Yahoo both want this fight to turn into their win. For Apple, there’s an obvious advantage in disengaging itself from the Google brand, a process that’s been in the making over several years as it decouples from Google products in iOS, requiring users to actively seek out Google apps rather than defaulting to them.

There’s a risk that these divisive tactics may fail—and blow up spectacularly in the faces of their architects.

Keeping Google Search is effectively like a free ad for Google, and one that generates money for the company even as it pays an untold amount for the privilege of being number one for Safari users. The firm may believe that both revenues and brand recognition balance out in its favor, though, making the investment worth it.

Dropping Google search for another firm—Apple’s forays into search appear to be moving slowly and behind the scenes—yanks the free advertising away and creates another opportunity for disentangling from Apple. But there’s a problem. Even as some users accept the change without a qualm, others might get irritated. On a low level, that might equate to navigating directly to the Google homepage or to changing search preferences, as seen when Yahoo won its match with Google over Firefox, a contest that ultimately turned out to be a pyrrhic victory.

But users might also decide to switch browsers entirely, opting for Firefox or even Chrome—leading users directly away from Apple’s home browser and into the arms of the enemy. Notably, Internet Explorer still accounts for a shocking 58 percent of market share, but Chrome is next with 20 percent, followed by Firefox at 15 and Safari at a measly five percent. Safari, in other words, might want to think twice before upsetting customers.

The potential consumer backlash in pushing people to adopt one company or the other whole hog could be considerable, as consumers don’t like being pushed around. They like choice. For consumers who use a mix of products from both companies, attempts to lock them to a single brand may result in reflexive reactions—maybe not as extreme as turning to Linux, but definitely a serious consideration of checking out what the opposition has to offer.

This isn’t just a question of who will end up with more customers at the end, but a more fundamental issue. With technology shaping so much of our daily lives, the tech that shapes our lives becomes increasingly important. The phones we use, the watches we wear, the computers we harness at home and on the job, the smart home systems we rely on, and all the other tech that makes up the fabric of our lives matters more acutely than it did back in the days when Microsoft and Apple snarked at each other in sarcastic ads.

In the future, brand loyalty may mean total commitment, with Apple or Google controlling not just which search engine you use, but your entire life. However, the thing about walled gardens is that most people want to see what’s on the other side.