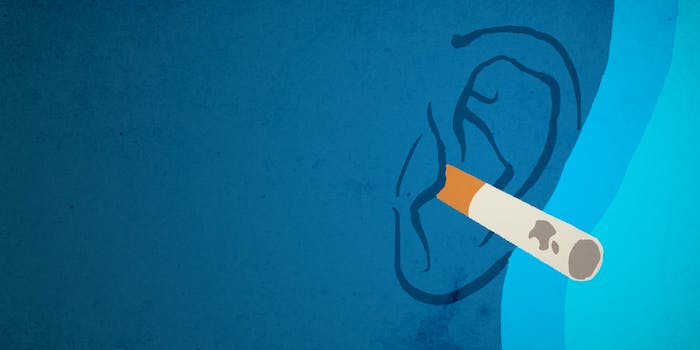 Apple’s new ear cigarettes are for cool kids only

Apple theoretically removed the headphone jack on its new iPhone to save space for other components, but it has the added benefit of allowing the company to charge $160 bucks for its “wireless, effortless, magical” new AirPods earbuds.

Have you seen these? They look like something really familiar, but I can’t put my finger on it.

Apple wants you to pay US$169 bucks so you can look like you have a limp cigarette coming out of your ear smh pic.twitter.com/UgK2rsympF

Strange that Apple, usually so careful and refined with its designs, is asking its adherents to walk around looking like they’ve got cigarettes in their ears.

And it’s not like the resemblance is subtle, or this is a fringe observation:

Anyone else think Apple’s new Airpods look like someone shoved a cigarette in their ear and bent it?

These will definitely sell, though. There are always going to be naked emperors who need the cool new thing, even when it’s patently ridiculous.

Fortunately, you don’t need the AirPods to use the iPhone 7. The new version of Apple’s EarPods, the ones that have cords to prevent them from looking like cigarettes, plugs into the Lightning port. Or you can use your old earphones with the included adapter. Or you can buy any set of Bluetooth earbuds or headphones.

But if you wanna be one of the cool kids, smoking from your earhole outside the high school, definitely get these AirPods.