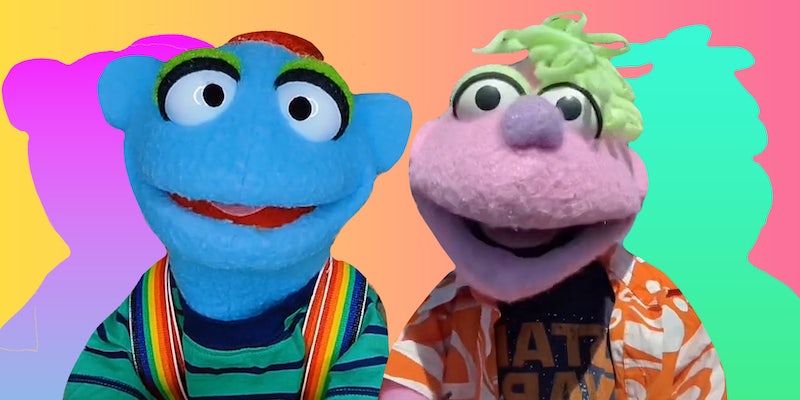 Anti-LGBTQ creators cause a rift in the TikTok puppet community

Throughout history, humans have been expressing themselves with puppets. From the shadow puppets of ancient Greece to the felt companions of Jim Henson’s Muppets, these caricatures have been representing humankind’s wants, needs, and desires. Like any storytelling device, they have been used to spread a myriad of ideologies, using an outstretched fluffy or felt arm to build a connection and trust with the audience.

On TikTok, dozens of furry, fluffy, hairy, or bald creations have been pulling in millions of views. Whether it’s a talking roll of toilet paper or a plastic shark, viewers just can’t seem to get enough of these covered moving hands.

But not all of the puppets on the platform are harmless, with some puppeteers using the anonymity and trust granted to them to push highly problematic ideologies.

Star Wars Dinx was once one of the fastest rising stars on Star Wars TikTok, amassing over 200,000 followers. The purple Muppet ripoff mainly made videos about the lore and history of George Lucas’ galaxy far, far, away, pulling in hundreds of thousands of views. Dinx’s videos were very descriptive and often broke down the nitty-gritty details of the overstuffed franchise.

But in mid-July, Facebook posts from Alex McConnehey, the man reportedly controlling Dinx, spread throughout TikTok and social media. Over the past year, he shared articles that opposed the 2020 election results, the legalization of gay marriage, and vaccine mandates. Though he removed all of these posts from his account, it did little to change the course of public opinion.

To try and quell the anger bubbling on social media, Dinx posted a now-deleted video admitting to posting about Disney “using the homosexual agenda to get more money.” Over the next few days, Dinx’s account would be taken down.

“When you think of puppets, you think of inclusive, Sesame Street, everybody holds hands and be happy,” Graves said. “And then when you see one talking about ‘Disney’s using the homosexual agenda’ for profit gain’ it sticks out.”

Dinx isn’t the only TikTok puppet to be called out for homophobic remarks. Johnnie Watts runs the 250,000 follower TikTok channel Piper’s Positivity, starring a blue puppet in rainbow suspenders. Under the guise of being a “Christian channel,” Watts posts videos that are anti-LGBTQ+ and push abortion misinformation. The account went private sometime in early August, though it’s unclear why.

Watts’ content started much purer. In 2016, he started posting videos of himself on YouTube as a clown. Over the next few years, he would create a cavalcade of puppets that would push the word of the gospel, adding Piper to the roster in 2019.

In late 2020, he transitioned to TikTok as sargentJW, cosplaying as different superheroes. He quickly gained infamy in the cosplay community, pushing anti-mask rhetoric and claiming that Captain America was a “conservative Christian.” The account has since been deleted.

Dinx and Piper have actually appeared in videos together, and Piper defended his pal in a now-deleted video.

How puppets can be prime vessels for hate speech

The Human Rights Campaign reported that anti-LGBTQ+ crime has been on the rise, with at least 57 transgender or gender non-conforming people being killed in 2021 alone. As new anti-LGBTQ+ legislation passes around the country and hate crimes are on the rise, more of that harmful content is starting to filter in through social media.

TikTok has some of the most popular puppet content across social media. The way TikTok feeds viewers content in an endless stream of algorithmic delight is perfect for puppets, whose bright and colorful personalities can snag attention in just a manner of seconds.

“It’s really easy to prop up your phone and press record, it’s also a natural monitor because you have to be watching the screen,” John Zagoren who runs Chad The Bird TikTok account said. “[Puppets are] a natural fit for TikTok. All of a sudden you get this colorful character, it’s a break.”

But the platform does little to limit harmful speech, with Piper’s Positivity alone having multiple backup accounts that are still active.

“For some people, it’s a great way to get your hate speech out there if they can’t see your face,” Zagoren added.

But what Dinx and Piper have in common is a similar look, being a derivative of Henson’s Whatnot characters, which are basically just puppet bases that anyone can attach a personality to. Zagoren believes that people that use these types of puppets are trying to “hide” their identity and just use the felt to push their own personal agenda.

Internet users have weaponized anonymity since the days of dial-up, making it a foundational element of today’s online spaces. These puppets are just a new mutation of a meme, spewing hate speech in a more colorful package.

“You can spot the people who like to hide because their puppets tend to sound like a dollar store Kermit,” Zagoren said.

But not all puppeteers spew hate, and some are actively against the anti-inclusion crowd. Many of Dinx’s and Piper’s most prominent critics have been fellow puppet creators.

“Puppets can also be racist and homophobic,” Graves said. “But it’s a huge group of weird people that make all types of stuff.”