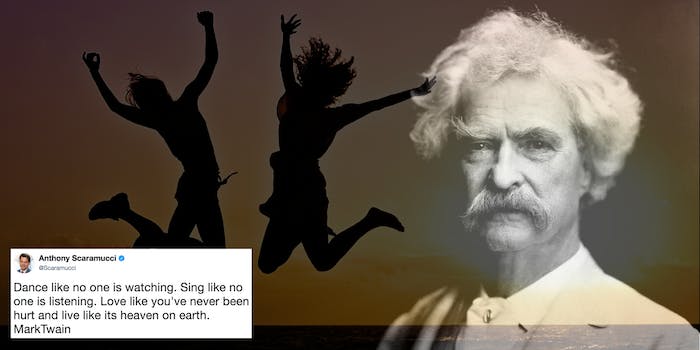 As far as documented history shows, Mark Twain never once wrote, or even uttered aloud, the phrase “Dance like no one is watching. Sing like no one is listening. Love like you’ve never been hurt, and live like its heaven on earth.”

However, that hasn’t stopped other writers, bloggers, or Etsy shop-owners from wrongly attributing the quote to the American author—Anthony Scaramucci, the newly-appointed White House communications director, included.

The tweet, posted on June 15, 2012, is pretty harmless—Twain himself probably wouldn’t be fazed to see the phrase attributed to him.

Scaramucci’s not the first to make this mistake, and he probably wasn’t the last during these past five years. The quote has been previously debunked as actually being part of a set of lyrics published by songwriters Susanna Clark and Richard Leigh in 1987. It’s been believed to have also been uttered by baseball legend Satchel Paige and writer/researcher William Purkey.

Even a staff member from the Mark Twain House in Hartford, Connecticut, told the Daily Dot that she frequently has to set visitors straight about the quote (the museum’s marketing department did not immediately respond to an official request for comment).

But the frequency at which the world wishes Twain penned “Dance like no one is watching” mattered not to the rest of Twitter, which immediately created a hot new meme format out of Scaramucci’s ignorance: misattributing equally vivacious or inspirational phrases to some lauded writer, historical figure, or philosopher who most definitely said no such thing.

Love. Love will keep us together. Think of me, babe, whenever. Some sweet-talking girl comes along…
– Jesus Christ

Yes, the meme is very similar to viral images of fictional characters with superimposed quotes from a second character, then attributed to a third character. However, the sheer brilliance of this internet joke is that it’s now rooted in an innocuous, inspirational tweet now only barely linked to the Trump presidency.

The Scara-meme-cci, if you will, can also be inverted. Have a really poignant, meaningful poem on the mind but just can’t remember the author? It’s probably by one of our 21st-century pop stars, tbh.

Do not go gentle into that good night,
Old age should burn and rave at close of day;
Rage, rage against the dying of the light
— Ke$ha

Can we just add “Tweet like no one is following you” to this list of wise proverbs, and attribute this one to Scaramucci? For some strange reason I’m getting the feeling this is a mantra he’s already taken to heart.