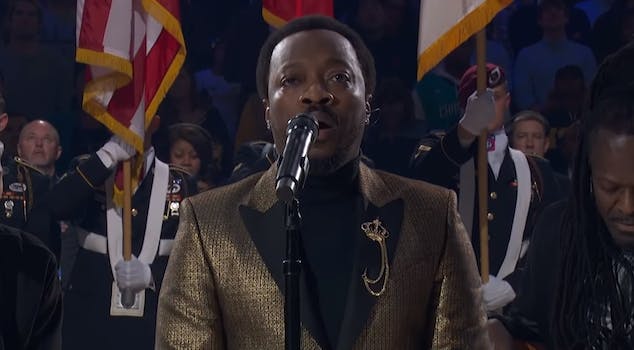 The 2019 NBA All-Star Game concluded Sunday night in Charlotte, North Carolina’s Spectrum Center, with LeBron James’ team beating Giannis Antetokounmpo’s squad. However, it seems basketball is beside the point: All Twitter could talk about were the performers, specifically Meek Mill, J. Cole, and Anthony Hamilton. Yes, there was a meme.

Anthony Hamilton just had one of the best National Anthem performances I’ve seen. That was fantastic.

If you’re feeling like the soul of America is dying of late, listen to Anthony Hamilton’s rendition of the National Anthem. It’ll make you feel 🇺🇸🇺🇸🇺🇸.
https://t.co/UZ7p5VeCqd

Anthony Hamilton just knocked that National Anthem out the park. Might be the most relaxing rendition yet#NBAAllStar

It drew comparisons to Marvin Gaye’s rendition during the 1983 NBA All-Star game, “what many—until now–regarded as the greatest rendition of the National Anthem,” Fox News notes.

(Not for nothing, he crushed that anthem, Marvin Gaye style.) #NBA #NBAAllStar

Marvin Gaye song the national anthem at the 1983 NBA All-Star game. Still one of my all-time favorites rendition to date. pic.twitter.com/gz48XAyfW8

I think Anthony Hamilton just overtook Marvin Gaye for the greatest national anthem in NBA All-Star Game history. That was one of the best I’ve ever heard. Full stop. #NBAAllStar

i just saw someone compare Anthony Hamilton’s star spangled banner to Marvin Gaye’s. i’m not even watching and i know that’s a lie.

look at Anthony Hamilton singlehandedly trynna save this sham of a Black History Month… pic.twitter.com/vg5kvrwKhV

Yet what truly stole the show for eagle-eyed Twitter users during Hamilton’s performance was his background guitar player’s infamous side-eye toward the end of the song, where the singer may have done a little “improv.” It has since become a meme:

The dude behind Anthony Hamilton is like, "That's not what we rehearsed" https://t.co/zDYG8NLcmy

He has unofficially been dubbed the NBA All-Star MVP by some users:

Look at the guitarist reaction he deserves MVP for the All-Star game😂😂😂 pic.twitter.com/almLI7aSGM

.@MeekMill went in on Dreams and Nightmares 🔥#NBAAllStar pic.twitter.com/84FJbt01Gx

The rapper even threw in a shoutout to recently released 21 Savage, which was not lost on Twitter. “J. Cole just did what his peers refused to do last week at the Grammys—acknowledge and show love and support for 21 Savage,” tweets @DJBooth.

J. Cole just did what his peers refused to do last week at the GRAMMYs — acknowledge and show love and support for 21 Savage.

The other thing that was not lost on Twitter was how the Super Bowl halftime performances paled in comparison to that of the NBA All-Star’s, with some even going so far as to say this makes NBA the better league. “The NFL hires a shirtless Maroon 5, and the NBA hires Meek and J. Cole… and people wonder [why] the NBA is the most popular and relevant league in the country in the modern era. A great league is a woke league,” tweets @briancordova.

The NFL hires a shirtless Maroon 5, and the NBA hires Meek and J. Cole… and people wonder the NBA is the most popular and relevant league in the country in the modern era. A great league is a woke league. #NBAAllstar

NBA gave us Meek Mill and J Cole, while the NFL had Maroon 5 out there for entertainment pic.twitter.com/y34C2YtGnX

J Cole’s performance at the All Star game is better than Travis Scott at the Super Bowl. It ain’t even close pic.twitter.com/k8gtcxmydf

i respect the vision pic.twitter.com/pa9AeIgiir

In case you were wondering, Kevin Durant is the All-Star game’s official MVP for the second time in his NBA career.