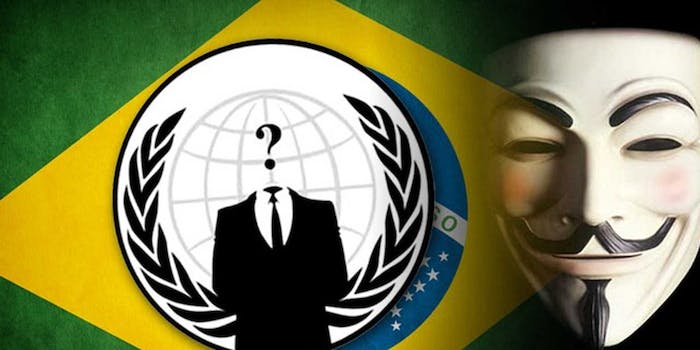 Protests on the ground are bleeding onto the Internet.

A branch of the notorious hacktivist collective Anonymous is bringing its digital hellfire down upon the World Cup.

The hacktivists plan to target websites of the event’s corporate sponsors, which include Adidas, Emirates airline, Coca-Cola and Budweiser, to protest financial inequality in Brazil, where the 2014 FIFA World Cup kicks off next week.

Brazil has reportedly spent at least $11.7 billion in its preparations for the 2014 World Cup. That’s more than three times the projected cost—an increase many believe to be the result of government corruption. Meanwhile, concerned citizens say the country is in dire need of hospitals and schools.

Reuters spoke to someone operating under the alias Che Commodore, who claimed to be involved with the operation.

“We have already conducted late-night tests to see which of the sites are more vulnerable,” Che Commodore told Reuters. “We have a plan of attack.”

Che Commodore also spoke with Reuters about an attack conducted earlier last week by a hacker known as AnonManifest, who used a phishing attack to break into Brazil’s Foreign Ministry’s email servers. AnonManifest was able to extract over three hundred documents before the Foreign Ministry shut down its email system.

The cyberattacks come even as protests on the ground spread across Brazil, imparting what the Guardian describes with impeccable understatement as “an unusual muted and emotionally complicated atmosphere.”

The opening match of the tournament will be played Thursday June 12 between Brazil and Croatia.