The organization's website was momentarily stunned by a piledriver of sorts.

First it was the New York Times, Twitter, and the Huffington Post disrupted by cyberattack. Then, for about 45 minutes today, wrestling fans were forced to endure the blackout of WWE.com, brought about by the hackers of Anonymous Indonesia. Don’t worry, the site’s back online: You’re now free to read “The 50 Most Beautiful People in WWE History” at your leisure.

The reasoning behind Anonymous Indonesia’s attack, or so the group announced on Twitter, was to draw attention to the developing situation in Syria. Fair enough, I suppose: It’s not easy to imagine that the WWE demographic is totally up to speed on current geopolitical events.

In tangible terms, however, the only real result was ridicule for this faction of Anonymous. 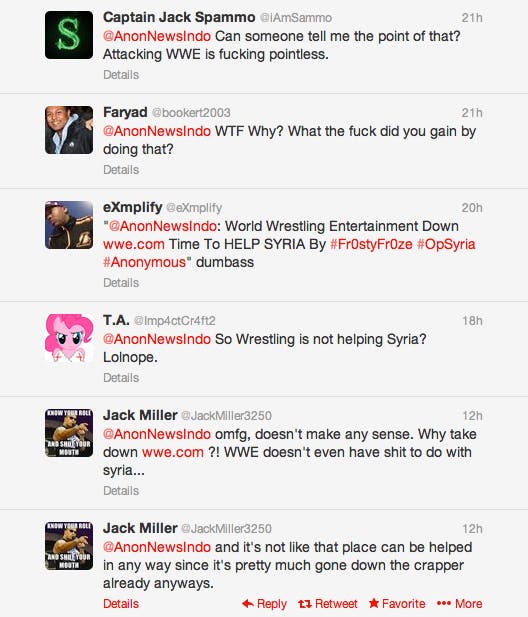 Bummer, and it looks as though hackers around the globe are running out of suitable targets for these displays of force. May we suggest BuzzFeed? Americans are a lot more likely to get upset when they can’t share listicles.