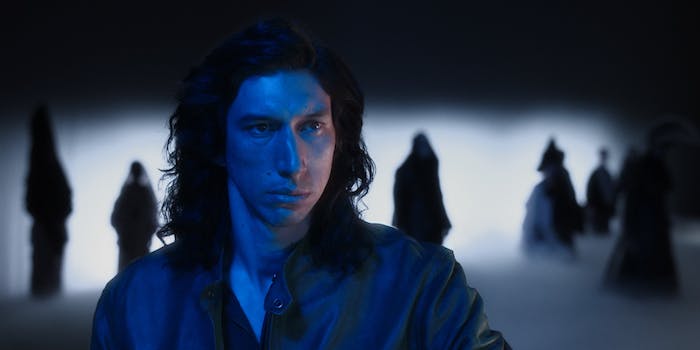 ‘Annette’ is a mesmerizing, weird musical—but it doesn’t always work

The film is now streaming on Amazon Prime.

Annette, French director Leos Carax’s (Holy Motors) eclectic rock opera that tries to evade being placed into a single box, begins with a dismantling of the fourth wall. Set in a music studio, Carax—coming off a suggestion to the audience that they “hold your breath until the very end of the show” and to only make noises in your head—and his daughter Natsya observe a recording session of the instantly infectious earworm “So May We Start.” The performance starts off with Ron and Russell Mael (the brothers behind the band Sparks and Annette’s architects) and a group of backup singers before expanding beyond the studio’s walls as most of Annette’s cast, donning street clothes, and a children’s choir layer on the harmonies, much of which appears to be shot in a single take.

It’s a high that the rest of Annette, with its nearly two-and-a-half-hour runtime, doesn’t really reach again. Annette sets to relay a well-worn story of one couple’s rise and fall that leans into the artifice of fame and both the baggage and ethical conundrums that come along with it; it’s beautifully shot and often evocative, and much of the music, which has Sparks’ magic touch all over it (the lyrics were co-written by Maels and Carax) will surely be stuck in your head for days or weeks to come. The execution is far shakier. It’s an overly long (and sometimes exhausting) journey full of thinly drawn characters and battered clichés that hit you over the head. It’s captivating, to be sure, but it also might confound audiences.

Annette centers on standup comedian Henry McHenry (Adam Driver) and opera diva Ann Defrasnoux (Marion Cotillard), who are madly in love with each other. For his act, Henry channels a mix of Andy Kaufman and Bo Burnham’s Inside (the latter is very much a coincidence; Annette was filmed pre-pandemic) as “The Ape of God” in a green robe and black boxer briefs. He warms up with bananas and cigarettes, and once he takes the stage, he tries to get a rise out of the crowd with offensive jokes, call and response, and some creative uses of his mic’s cord. He says he became a comedian to disarm people, and as he tells the crowd, is “the only way I know how to tell the truth without getting killed.”

Night after night, Henry revels in killing his audience. While Ann, whose characters die every night at the end of the opera (Ann’s opera voice mixes Cotillard’s voice with Catherine Trottmann’s), revels in saving them. Little about the pairing makes sense on paper. He’s loud and abrasive, she’s much more gentle. An amateur-looking gossip show that serves as a recurring interlude throughout Annette labels them “Beauty and the Bastard”—and even when we travel to the isolation of their lavish and secluded home, it gives off airs of both a romance and a horror. Soon enough, they’re married and Ann gives birth to the titular Annette, who, for much of the film, is portrayed by an actual puppet (and is jarring at first no matter how much you prepared for it ahead of time). And that’s where their troubles begin.

If you were expecting Annette to be an even two-hander based on trailers and promotion, the end result is a bit misleading: It’s really Driver’s showcase. It’s his voice, his point of view we’re most subjected to, it’s his sins we’re witness to, and in portraying Henry’s idiosyncrasies, he’s a looming presence even when he’s not the focus of a scene. If Driver was any less committed to portraying the level of gonzo energy that Annette requires, Annette becomes a gigantic, tangled mess.

But with so much of the focus on Henry, Ann tends to suffer as a result. Cotillard isn’t given much to do, often operating as a specter whose presence and level of fame—which grows and grows as Henry’s career goes out in flames in front of a hostile crowd by his own hand—haunt Henry; a dreamlike sequence in which six women accuse Henry of abusing them loops in seeds of mistrust, but it’s gone before it can really sink in. Even the Conductor (Simon Helberg), who harbors a love for Ann that’s never subsided, thinks of her more like an idea and a muse than as an actual person.

And then there’s Annette herself. Early in life, she’s seen as a burden by Henry, who is annoyed about having to “babysit” his daughter, leading him to imagine himself sitting on her. When Annette’s talents emerge, she’s someone who can be manipulated and pulled along: She’s the object of affection, adoration, a cash grab for Henry, and even a career boost for the Conductor. There’s never any attempt to mask the puppetry even though everyone interacts with Annette as though she’s a living person (that is by design), but Annette takes the visual of a puppet and leans into the metaphor way too hard before it pays off with the film’s devastating final minutes.

Annette is fantastical and grotesque; self-serious and a farce. It plays around with the limits of its own reality and casts some of its grander pieces on what could easily double as a movie stage; one scene, featuring the Conductor talking to himself in the middle of directing the orchestra, becomes mesmerizing to watch as the camera swirls around him. While not all of the music works, the songs are often in constant conversation with each other. Much of the soundtrack features repetitive lyrics (while others can reference something said ages ago), so depending on the music’s tempo, or who’s singing it, or even how it can shape in another’s hands, a song can easily turn into a weapon or a catalyst for something much bigger.

It won’t land with everyone. But when Annette is cut loose, there’s no denying that it’s always fascinating to watch the puppet show.

Annette is playing in select cities and is streaming on Amazon Prime Video.