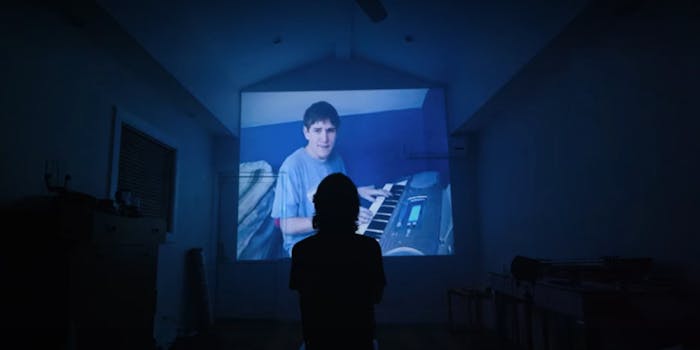 This week in streaming: Bo Burnham goes ‘Inside’ and ‘Cruella’ panders

Plus: The 'Friends' reunion produces a Matt LeBlanc meme.

Bo Burnham’s Inside looks into the void

After watching Bo Burnham’s new Netflix special, Inside, I apparently had the same reaction as a lot of people: Is Bo Burnham OK?

Vulture’s Jesse David Fox called the special “standup comedy of menace,” and he’s onto something. Elsewhere, someone changed the genre on the special’s landing page to say “horror.” Burnham’s musical comedy has always been awkward but self-aware, silly but resonant. Inside certainly feels haunted.

It was shot during the pandemic—in the same room where his 2016 special Make Happy ends—so that might explain the funny feelings. Burnham says late in the 90-minute special that he quit doing live comedy five years ago because of panic attacks but decided in January 2020 that he was ready again. He attempts to get back into his material but deploys changing aspect ratios, experimental lighting, and non-chronological order to slowly disorient.

Burnham moved behind the camera for 2018’s Eighth Grade, perhaps as a way to step out of the spotlight. He was one of the first big creators on YouTube, and, at one point, he literally looks back at his teenage self. As critic Jourdain Searles wrote on Twitter: “I feel like we all love him so much because it’s so rare for someone to be youtube famous for very long without totally getting lost in fan adoration and/or conflict.”

There is some conflict: He directs ire at the full-service internet that exists now. He mirrors versions of self and genre online, parodying outdated reaction videos and Instagram aesthetics, and the urge to explain and comment on everything. At certain points, he just projects iterations of himself, like so many open tabs.

Most essentially, he wonders why he’s even making the special, and who he’s trying to make laugh. And then the special becomes the thing he doesn’t want to finish, because that means facing reality.

That’s just one of Inside‘s many “I’m in this photo and I don’t like it” moments. There have been so many movies and TV shows set during a pandemic we’re still in, attempting to dramatize and monetize the moment. Inside just wants to know who else feels like shit.

Sometimes it feels like we’ll never escape the discourse around Disney‘s “first” gay character. As Dani Di Placido pointed out in Forbes last week, we’ve already seen seven (debatable) firsts already, including a blink-and-you’ll-miss-them couple in The Rise of Skywalker and Josh Gad’s infamous role in Beauty and the Beast. Now, there’s Artie in Cruella.

According to actor John McCrea (who starred in the drag musical Everybody’s Talking About Jamie), Artie was originally envisioned as a drag queen but wound up with a David Bowie-era glam-rock aesthetic instead. He’s a minor figure in the story, running a vintage clothing store in London. And while the film doesn’t directly state that he’s queer, it’s pretty clear from his mannerisms and a conversation he has with Cruella, when she asks how people react to his appearance.

“Some abuse and insults,” Artie quips. “But I like to say that ‘normal’ is the cruelest insult of them all.”

The “first gay character” cycle is partly fueled by Disney’s own PR campaigns, based around the idea that queer representation is uniquely impactful in a Disney movie. Considering Disney’s ubiquity as a brand, that’s arguably true for children’s entertainment.

But it’s absurd to suggest that Artie is meaningful representation. He follows a stereotype we’ve seen in numerous mainstream films already: a flamboyantly dressed gay man whose sexuality is rendered coyly apolitical and irrelevant. He exists to help the protagonist have a makeover.

Complicating the issue, he appears in a specific setting (1970s London) where many straight men were adopting androgynous fashion choices and elements of queer culture. So he remains in the realm of plausible deniability.

The Friends reunion special was released on HBO Max last week, serving up nostalgia and a version of Matt LeBlanc—who played Joey on the series—that Irish Twitter has turned into a meme.

A couple of screengrabs from the 104-minute special of LeBlanc sitting on a couch while talking to the rest of the cast went viral on Twitter over the weekend. Essentially, he looks like someone’s dad or uncle, between the posture and his striped button-down short-sleeved shirt. People began sharing the images with a line of dialogue, creating a new, endearing Friends character.

“Every Irish family has at least one of those uncles or great uncles -extreme salt of the Earth characters, full of dry wit and just a drop of cynicism,” @noclarity74 wrote.

Now Playing: “Hands Up (Eyes on Me),” Bo Burnham