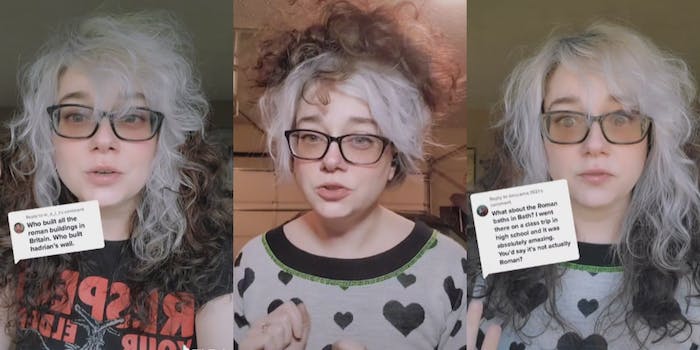 This TikToker caused an uproar by claiming that the Roman Empire is a hoax.

We’ve all heard of the Ancient Aliens theory, a pseudoscientific belief that aliens built (among other things) the Egyptian pyramids. This week, however, history buffs on TikTok were confronted with a brand new conspiracy theory: “Ancient Rome isn’t real.”

This idea was put forward by @momllennial_, a history TikToker who often sparks controversy on the app. Previously, she’s theorized that Alexander the Great was a woman, that Jesus Christ’s name can be translated as “clitoris healer,” and that the iconic 18th century painting “The Swing” is full of hidden codes about the French revolution. Over the past few weeks she’s posted a lot about Ancient Rome, including a TikTok claiming that “Hadrian’s Wall can’t be proven to be of Roman construction.”

This TikTok—and related videos where @momllennial_ claims that the Roman Empire was a hoax perpetuated by the Spanish Inquisition—spread across history TikTok like wildfire.

Her “Ancient Rome is a hoax” theory is based around the idea that Roman archaeological sites are frequently misinterpreted and that there “isn’t a single Roman document” in existence. These ideas were repeatedly debunked by classics professors and historians on the app—and in the case of her Hadrian’s Wall video, by people who had simply visited the site. Hadrian’s Wall is a popular tourist attraction in the U.K., and anyone who visits it can easily disprove @momllennial_’s claim that it’s a road rather than a wall:

Some of the backlash turned ugly, including anti-Semitic harassment aimed at @momllennial_. While a lot of popular conspiracy theories play into anti-Semitic tropes, @momllennial_ is a Jewish vlogger who pins many her theories on alleged conspiracies propogated by the Catholic church. This includes her Ancient Rome theory, which reignited an ongoing beef between her and Aidan Mattis, a history TikToker with over 900,000 followers. He’s posted numerous videos arguing with @momllennial_’s content. In a recent TikTok titled “Momllennial Called Me Racist,” Mattis accused her of defamation after @momllennial_ referred to him as a “genuine white supremacist” due to his involvement with the conservative organization Turning Point USA and gun rights activism. So yes, this historical debate has a messy side.

For the most part though, the response to @momllennial_’s theories came in the form of factual debunk TikToks and history jokes. Right now, HistoryTok is full of academics satirically mourning the end of their careers because Ancient Rome Isn’t Real—and people generally making fun of the drama.

Although @momllennial_’s TikToks get plenty of traction (94,000 followers and counting), there’s no real sign of her actual theories gaining popularity. When you look at the comments section on her videos, most responses are along the lines of “This is so utterly incorrect it’s unreal,” and people optimistically trying to share academic citations to disprove her ideas.

This says a lot about how misinformation spreads on the app. Like many social media sites, TikTok promotes inflammatory content because lots of people want to argue with it—and therefore repost it. In the case of HistoryTok, you have an entire community of people who enjoy correcting misinformation and educating their viewers. A theory like “Ancient Rome isn’t real” is catnip for this audience—especially when it’s presented in the style of a traditional debunk video from a more reliable source.

The Daily Dot has reached out to @momllenniall_ for comment.