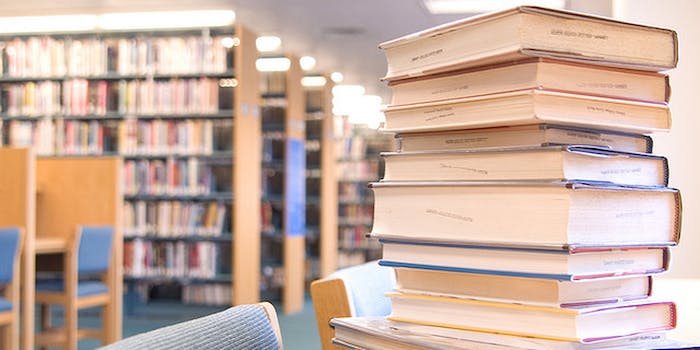 A word with @GuyInYourMFA, Twitter’s most insufferable writer

'I want every 24-year-old white man reading my work to see himself in my stories.'

Literary Twitter is full of characters, but few are as distinctive, or as funny, as @GuyInYourMFA. Written as a send-up of every pompous, self-delusional young scribe haunting your local liberal arts college, the parody account should be very recognizable to anyone who has ever taken a creative writing workshop or attended a coffee house poetry reading.

If you're not using a fountain pen in a leather-bound notebook, why bother?

The car turns left at the intersection to symbolize the narrator'a latent homosexual desire.

My mother doesn't understand that I don't need to find someone and "settle down." I am a writer. My job is to unsettle.

@GuyInYourMFA is the ultimate boring lit-dude, as versed in the Great American Novels (read: Novels by White Guys) as he is in writerly clichés. The real writer behind him, the brilliant Dana Schwartz, also helms the equally popular @DystopianYA, which parodies well-worn tropes of the YA genre. I interviewed @GuyInYourMFA to try to get at the man behind the woman behind the biting parody.

Hello, @GuyInYourMFA. Where are you right now?

I am sitting in a coffee shop, drinking a free-trade Americano black. My worn copy of Gaddis’ J R is on the table beside my typewriter.

You are presumably on summer break from your MFA program. How are you spending the break?

You misunderstand the life of an artist—I’m never on break. I’m spending my days the same way I spend all of my days: attempting to seduce the muse of fiction. In the evenings, I’m a bartender.

You misunderstand the life of an artist—I’m never on break.

Why did you decide to do an MFA? Are you learning much in the degree?

Again, you fail to grasp that I didn’t “decide” to do an MFA; I was compelled to, by the incessant harpy’s call of literature. To be completely honest, I don’t learn much from my colleagues—I feel as though my work is providing the education. You’d be surprised how often so-called “writers” fail to grasp even the basic concept of metaphor.

Tell us a little about your background. Where did you grow up? Do you come from a big family? You’ve mentioned your mother on your Twitter. What is she like?

I grew up in the American suburbs, in the world of white picket fences and Old Fashions before dinner and forgotten secrets. My family consists of my father, a stoic man, difficult to know and more difficult to love; my little brother Robbie, who has sold his soul to the devils on Wall Street in exchange for his chance at the American Dream; and my mother Elaine, a long-suffering housewife who fails to understand the important work of the artist.

I’m currently writing my second novel, a deconstruction of the meaninglessness of post-9/11 America through a series of one-night stands in Bushwick.

Can you walk us through your typical day of classes? How do you get along with your professors?

While most of my professors don’t seem to recognize my unique voice (insisting that I use “proper grammar” and “spellcheck” and “complete sentences” and “multidimensional characters”), a few do see me as more of a colleague than a student. I happened to grab a cognac with Professor Kirkman after workshop on Tuesday, but the other students shouldn’t feel bad about him not asking them or anything.

I’m currently writing my second novel, a deconstruction of the meaninglessness of post-9/11 America through a series of one-night stands in Bushwick.

Are any of your writing professors women? Any friction there?

One. My first year in the program, my poetry professor was a woman (I’ll refrain from using her name to protect her from embarrassment). To put it simply, she neglected to grasp the complexities of my work. She failed to understand that revision is contrary to my process as an artist.

I remember from my own MFA that the degree involves doing a lot of public readings. Do you enjoy reading your own work in public? How have people responded to your work?

I shy away from reading my own work outside of an academic environment for two reasons. The first: I did not go into writing for the acclaim and admiration I inevitably will receive. It shouldn’t matter to my writing how well my slouchy hat fits on my head, how sharp my jawline is, or how perfectly un-groomed my stubble. People should focus on the words themselves. Second, once my work is filtered through my voice, it becomes harder for the reader to see the protagonist as an Everyman. I want every 24-year-old white man reading my work to see himself in my stories.

Speaking of your work, you often tweet about this big novel you’re working on. Care to tease any details about it? Maybe even a short excerpt?

I can give you my working title: Boundless Afflictions. Here is a very brief excerpt: “He pulled the sheet around him. The woman was still there, naked, her skin milky white and pale in the early morning light like a translucent china plate. A siren wailed outside the window and the man rose from the mattress on the floor with a quiet groan. He wanted a cigarette.”

Who are the biggest influences on your writing? Are there any contemporary writers who inspire you?

Gaddis, Pynchon, David Foster Wallace, Ginsberg, Kerouac, Nabokov—I could go on. I will say Jonathan Franzen is a writer I’d consider an equal—I was moderately impressed by his piece which appeared in The New Yorker last week.

I want every 24-year-old white man reading my work to see himself in my stories.

What is your creative process like? Walk us through a typical writing session.

I prefer to bring my typewriters to coffee shops and bars to break down the wall between the artistic process and the outside world. I get my drink—either black coffee or whisky, no ice—and get to work as soon as inspiration strikes. I do not edit. I let the words flow through me as they flowed through Joyce and Ginsberg.

Your Twitter is very popular. But how do you square social networking with your concerns with hight art? Isn’t Twitter too lowbrow for you?

My “tweets” are actually musings that I’ve written on spare scraps of paper. An acquaintance, Dana Schwartz, puts them on the web for the edification of the masses.

Let’s do some word association… I’ll say a few words and you say the first thing that pops into your head: Typewriter.

I will say Jonathan Franzen is a writer I’d consider an equal—I was moderately impressed by his piece which appeared in The New Yorker last week.

What do you hope to accomplish with your writing?

I write in order to understand, and hopefully to give a much needed voice to the white, upper-middle class American male in society today.

If you had one thing to say to your generation of young writers, what would it be?

Read books by the great white men. If you share the gift, you’ll know. If not, support those who do as best you can.