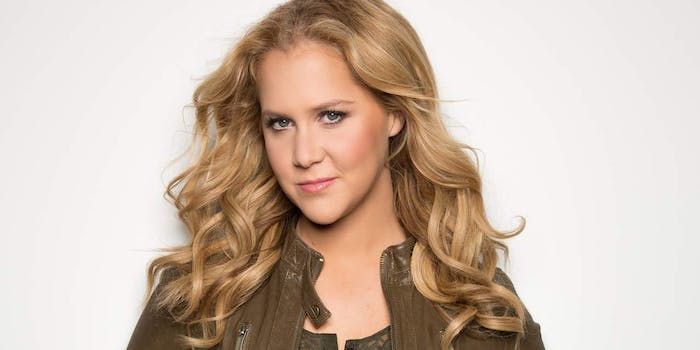 Ladyparts are having their moment.

If you’ve watched Jon Stewart pretty much ever, you’ve probably heard him throwing around the Comedy Central-approved “dick” (as the FCC doesn’t regulate language on cable). But until very recently, “pussy” was still verboten on everyone’s favorite comedy network—until, that is, Amy Schumer’s production crew went on an all-out offensive for gender parity in slang. This month, they finally won, and the word will no longer be accompanied by an obnoxious bleeping noise on air. Score one for the feminist agenda.

It was high time for “pussy” to get liberated on Comedy Central, and the network should have known what it was in for when it took on Inside Amy Schumer. While the comedian didn’t set out to write a show that was explicitly feminist, it quickly took on a life of its own and began skewering gender issues with sharp skits on a variety of issues women face. At the same Paley Center appearance where she discussed how they won the war for pussy, Schumer also talked about owning her show’s identity as a feminist program, not just a comedy show, as the two things went hand in hand.

It wasn’t like, ‘Everyone—bras off! We’re going to make the dream feminist show!’ but we accept the responsibility and are aware of that. I hate when pop stars, like Miley Cyrus, say they never meant to be a role model. It’s like, ‘Well, bitch, you are!’

After making Aaron Sorkin apologize for the sexism on The Newsroom, it’s safe to say that Schumer was making waves in Hollywood, but, oddly, she still couldn’t say “pussy,” thanks to outdated standards and practices at the network. As Mary Elizabeth Williams points out, “And while the latest fight, for ‘pussy,’ may not exactly be the most epic battle in public discourse, it still feels particularly meaningful. The insults ‘douche’ and ‘bitch,’ two words with their roots in womanhood, have long been commonplace on TV, but ‘pussy’ has remained all but verboten.”

Executive producer Dan Powell thought that was a load of hogwash, so he wrote the network, outlining why he thought the disparity between the two terms was ridiculous—and after some back and forth, Inside Amy Schumer won out and made comedy history with the skit “Acting Off-Camera.”

But this isn’t just about Amy Schumer and the fight to defend the right to use “pussy” when talking about genitals. It’s also about changing attitudes when it comes to female sexuality. In the last few years, there’s been a dramatic uptick of depictions of female pleasure in visual media, attributable perhaps in part to some generational shifts. As millennials grow up, become more outspoken, and start shaping the media around them, the media are being forced to respond.

Millennials are more sexually open, and more interested in discussing sexuality and gender, than previous generations. The Internet, where millennials are highly engaged, provides a broad frontier not just for dating websites (including those tailored to fetish communities, like Fetlife), but for discussions about sex, sensuality, and culture. Conversations that might have been viewed as sordid and uncomfortable offline not too long ago are exploding online, where a sex positive movement is challenging conventional notions about sexuality. The movement asks in particular why women should be treated as second class, sexually, tapping into the growth of the online feminist movement, which has taken a leading role in discussions about sex positivity and sexual empowerment.

Conversations about female sexuality are confronting conventionality and empowering women to make their own choices. As Rachel Zar writes in Refinery29:

These conversations have laid the groundwork for some radical changes in media models. Even the staid New York Times has to admit that the way the media handle female sexuality is starting to (slowly) change. Visual media are no longer dominated by broadcast networks, cable, and conventional studios. Online-only programming and webisodes are starting to become pop culture phenomena, with shows like House of Cards and Orange is the New Black being taken seriously and on-par with traditional television programming. Meanwhile, crowdfunded films like Dear White People are changing the dynamic on the big screen as well, challenging the public to rethink their media.

If Girls can show a degrading cumshot, then we should be able to depict positive images of female sexuality. Women aren’t just having sex in service to objectifying media anymore, and they aren’t just doing it primarily as tools to please the men around them. “While female pleasure is still considered more obscene than violence—just check out the ratings of movies—‘caring about how and whether a woman gets off’ seems to be taking up more and more space in the cultural conversation,” writes Jamie Peck at The Gloss. They’re having hot, unabashed, steamy, and pleasurable sex, taking control of their own sexuality. Lesbians aren’t desexed or shown primarily for the purpose of exciting straight men. In turn, too, men are serving women, rather than the other way around, and it’s shaking up notions of sexuality.

The war on censorship bravely mounted by Schumer’s production crew is part of this growing phenomenon. In a world where one set of genitals is privileged over another in media by virtue of sexism and self-censorship, sexual parity is effectively impossible to accomplish. Comedy Central wasn’t just addressing the inherent sexism embodied in refusing to discuss or acknowledge the pussy—it was also engaging directly with the idea that women enjoy sexuality and like being able to talk openly about it.

At Madame Noire, though, Charing Ball notes that the conversation about female sexuality and the translation to visual media still has a long way to go. Right now, it’s heavily dominated by white women—despite the examples above featuring Black female characters. True gender parity, and conversations about sexuality, won’t be achieved until women of color are sexually empowered onscreen and treated equitably in comparison with white women; until women like Olivia Pope and Annalise Keating are given the same accolades as Hannah Horvath and, well, Amy Schumer.

Being able to say the “P-word” on air is a step, and an important one, but we haven’t reached the end of the road yet. Still, Schumer’s accomplishment deserves some commendations, and the Internet is definitely entitled to some of the credit, as its been a major driver behind the growing conversation about women’s sexuality.

Photo via Inside Amy Schumer/Trailer