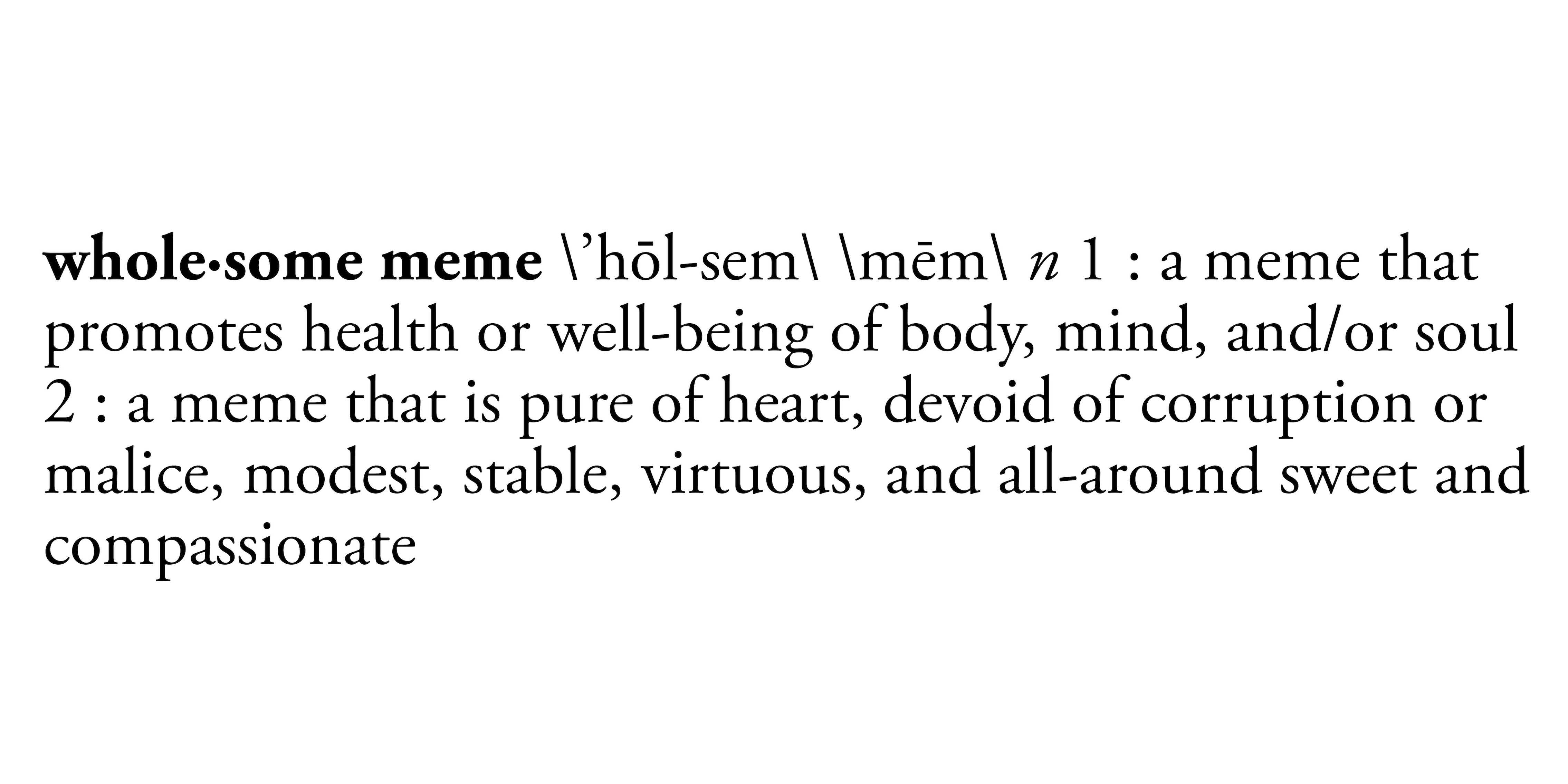 In a vitriolic online world, wholesome memes make a comeback

Is there anything wrong with happy memes?

The internet is frequently a cruel, snarky, and unforgiving place. People attack strangers in comment threads and make fun of others’ appearances. Those who are outspoken about a divisive issue may receive death or rape threats. On Twitter, there’s always the fear of miswording one tweet and getting publicly shamed. And then there’s the news cycle. It’s a wonder so many of us are able to function at all after looking at the internet for several hours each day. If you’re a regular internet user, you’ve probably identified some form of mood-enhancing content that helps you cope. Cat videos. Stories of lost animals being reunited with their owners. Instagram accounts that document positive life changes. GIFs of memorable scenes in films and TV shows.

Wholesome memes are another option. They’ve been around the internet for a while, especially on sites like Tumblr, but in the last year their popularity and reach has increased. Now the memes pop up all over, encouraging people to support friends and significant others. They tell you to go easy on yourself in times of struggle. It’s the internet equivalent of receiving a hug.

Wholesome memes are also usually funny. There are plenty of wholesome memes that reference other memes, like “the floor is” meme.

There are a few accounts that serve as destinations for feel-good memes. The Wholesome Memes Twitter account, created in August 2016, pulls in nearly 200K followers.

Respectful Memes often posts the same memes. And there’s the subreddit Wholesome Memes, which was created last fall and counts nearly 700K subscribers. It’s top post is about not feeling too bad if your post doesn’t do too well.

In a post on Reddit’s blog earlier this year, the creator of the subreddit, who goes by the username Poppwall, said the original title for the group was “Internet for the Spirit.” “I think it’s still very fitting,” he told Reddit. Poppwall identified the audience for wholesome memes as people “who want to celebrate the good in their lives. Hopefully, that’s everybody, but we have the ones that like memes.”

The subreddit includes a definition for a wholesome meme:

a meme that promotes health or well-being of body, mind, and/or soul

a meme that is pure of heart, devoid of corruption or malice, modest, stable, virtuous, and all-around sweet and compassionate

a meme that conveys support, positivity, compassion, understanding, love, affection, and genuine friendship by re-contextualizing classic meme formats, and using them to display warmth and empathy

It’s likely not a coincidence that people are turning to purveyors of wholesome memes during a chaotic time in the world. The memes are like tiny fictional stories that depict a world where everyone is compassionate and mature. They rely on clever misdirection, with people expecting the worst and then getting the best.

In this utopian ideal, people say thank you, always text back, never think of cheating in a relationship, and treat all humans equally. We know the real world isn’t actually like the world depicted in these memes, and that’s why they are so compelling. By showing an idealized version of our world, the memes reveal a deeper truth about humanity—which is particularly evident in edited versions of old memes.

The “If my math(s) teacher looked like this, I would go to school everyday” meme, which appeared on the internet earlier this year, showed a photo of a young, blonde teacher wearing a sleeveless gray dress.

Clearly, the meme was aimed at teenage boys with raging hormones. It wasn’t obscene; compared to other online content, it was very mild. But it was yet another example of how people objectify women, both on and offline.

A wholesome version of the meme appeared online recently. “If my math teacher looked like this, I would continue to follow my daily routine and act as if nothing was different because all women are equal,” the text read under the photo of the teacher.

Teenage students are not known for having pure thoughts. The meme is laughably unrealistic, but that’s the point. Wholesome memes ask, “What if the world looked like this?”

In March, a video called “Hi Stranger” by the animator Kirsten Lepore went viral. The video showed a clay alien-like creature talking to the camera in a calm voice while soothing music played in the background. Near the end of the short video, the clay creature says: “You’re so hard on yourself. But you’re wonderful and worthy of being loved.” The video was genuine and optimistic, and people liked it. The comment section for the video actually features many positive comments—a rarity on YouTube. “Hi Stranger” and wholesome memes both promote self-love, a concept that is chiefly absent in the many forms of vitriolic content found on the internet.

Wholesome memes are becoming increasingly popular for a reason. Beyond simply painting a picture of a hyperbolically kind world, the content is genuinely soothing. The memes act as an antidote to cynicism and negative thoughts—and they help you digest whatever terrible thing you just saw on the internet. It’s easy to become disillusioned with the world after spending a day (or even 5 minutes) plugged into mobile devices. But internet-created content that promotes positive thinking and kindness offers a little bit of hope.

It’s sure better than none at all.