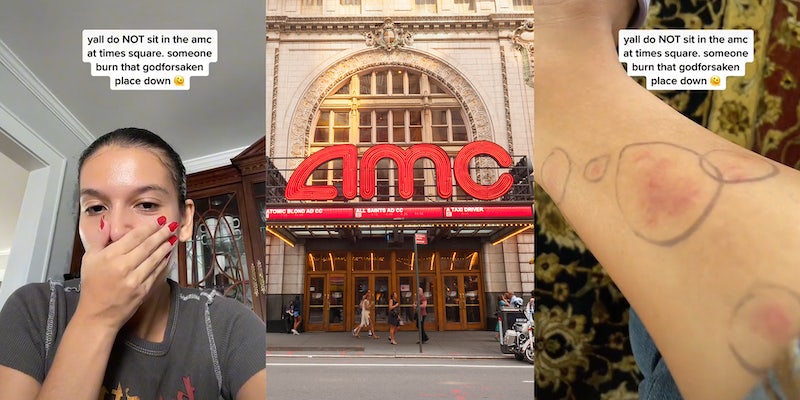 ‘Someone burn that godforsaken place down’: Woman says she got bedbug bites from sitting in chair at AMC Theatres

A woman on TikTok has a warning for movie-goers after she says she received bedbug bites after sitting in a chair at an AMC Theatres location.

“Do NOT sit in the amc at times square,” TikTok user Dani (@xoxodanixoxo) urged in a video with over 786,000 views.

In the video, Dani shares her alleged bedbug bites, which she says she received while attending a work event at the cinema.

“Someone burn that godforsaken place down,” Dani added in the text overlaying the video.

This isn’t the first time that the Times Square AMC Theatre, AMC Empire 25, has faced allegations of bedbugs. Various news agencies have reported confirmed or suspected appearances of bedbugs at the theater in 2010, 2011, 2015, and 2017, though the cinema has denied some of these claims.

As a result, the theater earned a reputation online as a breeding ground for the critters, with tweets going back for years referencing its various troubles with bedbugs.

This may be why one highly-favorited comment under Dani’s video simply read, “I thought everyone knew this.”

While Dani’s video may be the most viral of the accusations that bedbugs have returned to AMC Empire 25, she’s not alone in her claim.

User Jennifer (@lunar_usagi13) also claims to have received bedbug bites at AMC Empire 25. She states in the caption that she was compensated with “4 free tickets.”

“Had to go to target to get a new shirt,allergy meds and itch cream for my bites. My poor finger is swollen. I can’t bend it,” she wrote in the caption. “…But it’s like dam so many ppl I hear now gotten bitten since yesterday and today. They need to shut down and get that handled.”

In another video, TikToker Jaela (@jaelarosee) claims she “saw the little critter crawling on my jeans” while waiting for a screening of Elvis, per a comment under the video.

In comments across the videos, users shared their thoughts on the topic.

“I’m crying that this news breaks every 5 years,” wrote one user.

“Their bed bugs have 401k and company stock at this point,” joked another.

Update 11:40am CT, Sept. 7: AMC Theatres denied in a statement to the New York Post Tuesday afternoon that its theater has bedbugs. Dani has since made her TikTok account private.

We’ve reached out to Dani, Treneice, Jennifer, and Jaela via Instagram direct message as well as to AMC Theatres via email.