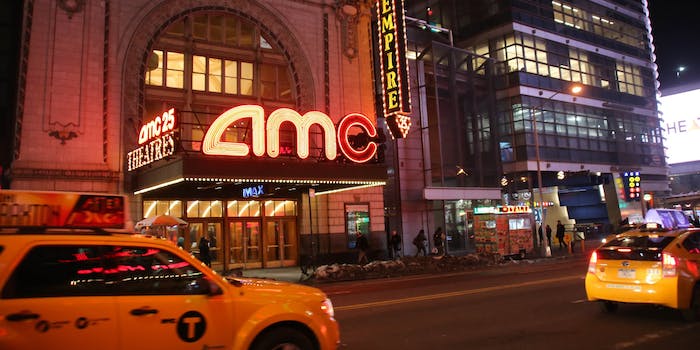 AMC theaters are reopening, and customers don’t have to wear masks

American movie theaters are beginning to reopen, with AMC—the biggest chain in the U.S.—announcing plans to resume screenings on July 15.

Detractors are criticizing this as an unsafe move during the coronavirus pandemic because while state governments may choose to ease their lockdown measures, the virus remains as dangerous as ever. On top of this, AMC will not require customers to wear masks indoors.

“We did not want to be drawn into a political controversy,” AMC CEO Adam Aron told Variety. “We thought it might be counterproductive if we forced mask wearing on those people who believe strongly that it is not necessary. We think that the vast majority of AMC guests will be wearing masks.”

However, theaters will reopen with reduced seating capacity at first to encourage social distancing.

Similarly, Regal and Cinemark theaters will not have a mandatory mask rule. AMC cinemas also won’t perform temperature checks on customers (admittedly a rather fallible way of testing for the coronavirus), although employees will be required to wear masks and have their temperatures tested regularly. AMC’s announcement was not well-received, earning immediate pushback from commenters including New York Times film critic A.O. Scott, and former Vermont Governor Howard Dean (D).

AMC was already in debt before the pandemic and faces bankruptcy after the past few months of inactivity. It’s clear that the choice to reopen is all about AMC’s bottom line, not the safety of its customers.

The same goes for any other cinema chains choosing to reopen in the U.S., where the coronavirus continues to spread at an alarming rate. Alongside bars and concert venues, movie theaters are one of the most dangerous places to go right now: A crowded indoor space with limited airflow.

Cinema chains have a symbiotic relationship with movie studios, which explains why some films are getting bizarrely early release dates like Disney’s Mulan (July 24) and Warner Bros. Tenet (July 31).

It’s hard to imagine these movies making a profit when many people will voluntarily stay away from theaters for health reasons, so the early release dates suggest some desperate lobbying from theater chains concerned about bankruptcy.

The AMC CEO’s comments about avoiding “political controversy” is catering to customers with actively dangerous views about public safety. There’s growing evidence that masks are a key way to slow the pandemic, and their use is only “political” if you buy into conspiracy theories about the coronavirus being less dangerous than it actually is.