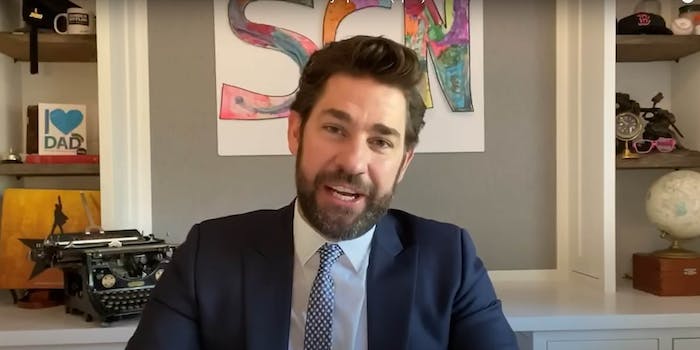 The key appeal was its low-fi homemade style.

John Krasinski‘s YouTube series, Some Good News, was one of the first genuine hits produced during lockdown, an uplifting news show hosted from inside Krasinski’s home. The key appeal was its low-fi homemade style, and now Krasinski has arguably ruined it by selling the show to ViacomCBS for a boatload of cash.

Following what the Hollywood Reporter describes as a “massive bidding war,” Some Good News has been licensed to CBS All Access, CBS’s paid subscription service. Krasinski will continue on as executive producer, with someone else now hosting the series. Apparently “some sort of on-air presence” will still be involved for Krasinski.

Some Good News was launched as a source of feel-good news stories during a traumatic time. Produced on what appeared to be a shoestring budget, it built on Krasinski’s image as a relatable everyman kind of celebrity. The show’s guests called in from their own homes in a casual style, including movie stars like Robert De Niro and Brad Pitt, and public figures like Malala Yousafzai, Oprah Winfrey, and Martha Stewart.

As a charmingly clunky vlog chat show filmed in Krasinski’s living room, the format was implicitly suited to YouTube. And in terms of the show’s overall purpose, it definitely felt like a voluntary project where celebrities were donating their time to cheer up the audience at home.

So while Krasinski is obviously free to sell a creative project he built from scratch, there’s still something instinctively gross about him profiting from Some Good News.

In two months the show gained 2.57 million subscribers, and according to THR, it’s been approached by numerous corporate sponsors including AT&T. The ViacomCBS deal came after Krasinski was courted by several potential broadcasters.

Krasinski came up with the original idea seven years ago, but “news show dedicated to good news” isn’t an especially groundbreaking concept in itself. Some Good News succeeded because there was a sudden market for uplifting content on YouTube and because Krasinski’s celebrity acquaintances unexpectedly had a lot of free time on their hands.

It’s hard to see it having the same impact on a paid subscription service.