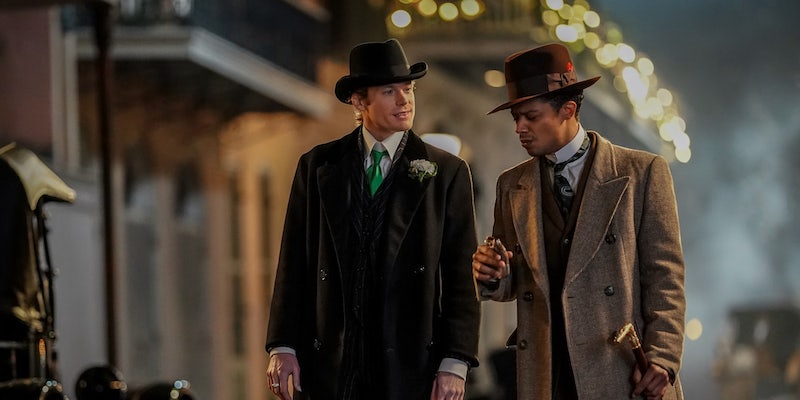 ‘Interview with the Vampire’: A celebration of toxic romance

This post includes spoilers up to episode 2 of Interview with the Vampire.

Actor Jacob Anderson (who plays Louis) described the show as “the most beautifully written rant about an ex,” which sounds about right. The viewing experience is roughly akin to reading one of those mesmerizingly disastrous /r/relationships posts where the OP details a neverending cascade of red flags. Actually, Louis explains, it was powerfully seductive when Lestat ambushed him at his brother’s funeral and then murdered a pair of priests! Cutting back to the present day, reporter Daniel Molloy embodies the Greek chorus of Reddit commenters, raising his eyebrows in dry disbelief.

Remixing the novel by Anne Rice, AMC’s Interview introduces Louis as a young Black brothel-owner in 1910s New Orleans, bewitched by the charismatic and amoral French vampire Lestat. From its very first moments, their tumultuous relationship is beset by class and racial divides, a 200-year age gap, and untenable disagreements over the morality of drinking human blood.

It feels both laughable and pointless to analyze Lestat’s behavior using the typical language of abusive relationships. Yes, he’s literally a predator. Yes, he’s selfish and cruel and manipulative. His first words to Louis are a racist microaggression, and their happily-ever-after begins with a double homicide. Nothing about this romance is remotely healthy. But this blatant toxicity is what shields Interview with the Vampire from the kind of purity discourse we see around media like Twilight, whose detractors raise concerns about “romanticizing” abusive behavior. Interview makes that conversation part of the text, inviting us to kick back and enjoy the agony.

In the same way that Bryan Fuller’s Hannibal slyly endorsed Hannibal Lecter’s monstrous worldview, Interview revels in Lestat’s theatrical amorality. Through the rose-tinted lens of Louis’ unreliable narration, their courtship unfolds like a morbid romcom. In the 1910s, Louis is essentially the protagonist of a horror story, stalked by a ravenous demon. However, Louis doesn’t like to view it that way. Describing their courtship, he emphasizes Lestat’s hypnotic charm, highlighting the tender moments between the vindictive jabs and blow-up arguments.

Meanwhile, the show’s impeccable comic timing reframes Lestat’s bloodlust as an amusing foible. His in-house crematorium becomes a punchline, disposing of corpses as if he and Louis are bickering over who takes out the trash. This balance between a tragic narrative structure and a sexy, often lighthearted tone is a triumph of writing and direction, hinging on a pair of fascinating performances.

Sam Reid’s melodramatic, snobbish Lestat is an immediate attention-grabber, but Jacob Anderson sneaks up on you, displaying incredible range as the vulnerable, angry, affectionate, frequently hypocritical Louis. In the interview scenes, he’s controlling and self-assured, using Daniel Molloy to exert power over his own memories of Lestat. Back in the 1910s, he’s emotionally raw—a man caught between different worlds and social strata, hungry for intimacy and far too human to handle Lestat’s monstrousness. Anderson can turn on a dime from boyish excitement to gothic anguish, punctuated by analytical commentary from his present-day self, a recluse who dresses like a tech billionaire and lives in a Dubai penthouse staffed by servants who worship him as a god.

Episode 2’s opera sequence illustrates the precision of the show’s balance between romance, comedy and dark psychological drama. Not long after being turned into a vampire, Louis is struggling with his thirst, tempted to eat his sister’s newborn baby. Fleeing home to Lestat, he receives a characteristically poetic yet callous pep-talk.

“I have for two centuries walked this Earth and can report, you have no twin,” says Lestat tenderly, battling Louis’ self-loathing with a cloyingly possessive declaration of love. A couple of minutes later, Lestat has forgotten Louis’ troubles and is trying to persuade him to go to the opera —a date that unapologetically caters to Lestat’s own interests. It’s a hilariously domestic moment, positioning Lestat as a selfish sitcom husband—an idea foreshadowed by the placement of their coffins, side-by-side like the twin beds of the I Love Lucy era.

Pulling out a pair of tuxedoes, Lestat monologues about his love of the opera Don Pasquale, drowning out Louis’ plaintive cry of “I almost ate my nephew, Lestat!” Reluctantly, Louis allows himself to be charmed. He joins Lestat at the theater… where he must pretend to be Lestat’s servant, because as a Black man, he can’t otherwise sit in Lestat’s private box. Lestat doesn’t see the problem. Their relationship dynamic is a nightmare, but Lestat keeps pulling him back in—this time with his heartfelt passion for music, one of his few relatably human traits.

The dearth of romantic genre TV is partly down to narrative structure. Traditional love stories are finite, gearing up toward a specific conclusion. By contrast, most American TV dramas aim to continue as long as possible. There’s a big difference between the standalone arcs of romance novels and movies, and the will-they/won’t-they relationships we see in sitcom B-plots, stringing audiences along through seasonal renewals.

But gothic romance circumvents this problem. Interview with the Vampire’s two lovers get together in episode 1, and we know their relationship can’t possibly end well. Yet the show is still undeniably a love story, offering far more staying-power thanks to the volatility of its central relationship.

When Lestat turns Louis, he’s motivated both by love and by a desire to avoid loneliness and boredom. In turn, that desire fuels an addictive cycle of toxic high and lows. Even a century later, Louis sympathizes with his younger self for sticking around, caught up in Lestat’s mood swings. Like Dracula or the Phantom of the Opera or Hannibal Lecter—a proud lineage of stylish European stalkers—the appeal lies in the all-consuming passion. We’re not here for healthy behavior; we’re here for dangerous obsession, the messier the better.