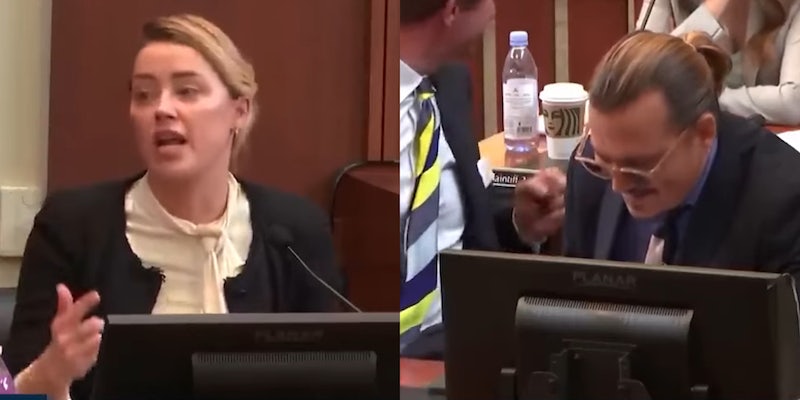 ‘By doing this, she’s opened up the door’: Legal expert TikTokers explain why Johnny Depp’s lawyer got excited when Amber Heard brought up Kate Moss on the stand

Users across social media are continuing to closely follow the Johnny Depp and Amber Heard defamation trial. Recently, a moment from the trial caught users’ attention: the apparent celebration by Depp’s legal team when Heard mentioned Kate Moss on the stand.

When giving testimony about her alleged abuse, Heard told a story that mentioned Depp’s ex-girlfriend Kate Moss. Heard previously told a British court in 2020 that “[Depp] pushed Kate Moss down the stairs,” saying that she “heard this from two people.” Neither Depp nor Moss have addressed this claim.

“I just see my little sister with her … back to the staircase, and Johnny swings at her … I don’t hesitate, I don’t wait—I just, in my head, I just instantly think of Kate Moss and the stairs, and I swung at him,” Heard says in the video. At the mention of Moss, it appears as though Depp’s lawyer turns and gives a fist pump.

In a video posted by legal TikTokers and Harvard Law graduates Maclen and Ashleigh (@the.law.says.what), the duo offers an opinion about why exactly Depp’s lawyers appear euphoric following Moss’ mention.

First, the duo plays a clip from the hearing, followed by both of them chastising both Heard and her lawyer for the comment.

“OK, so trials are, or at least try to be, controlled environments. You can’t just bring up whatever you want,” Maclen starts.

This specificity attempts to ensure that a trial’s outcome is based on the exact incident noted in the trial, not on a judgment of the defendant’s character. As Ashleigh details, with some exceptions, you can’t bring up prior, seemingly-unrelated incidents in your case—”unless the other side opens the door.”

“Amber Heard brought up Johnny Depp’s past relationship with Kate Moss to suggest he pushed her down the stairs,” Ashleigh explains. Maclen adds, “It’s possible that by doing this she’s opened up the door to discuss prior bad acts in relationships.”

According to Newsweek, Heard was arrested in Seattle, Washington, on Sept. 14, 2009 after she allegedly struck then-girlfriend Tasya van Ree in the arm. Van Ree has since stated that the event was “misinterpreted,” while Heard denied that any domestic violence occurred in the relationship, stating in 2016 that there was “no physical violence, no physical abuse, and zero domestic violence whatsoever between us.”

Legal experts consulted by the New York Post agree with Ashleigh and Maclen’s assessment, saying that this mention could hurt Heard’s case.

“[Moss] is still allegedly friends with Johnny and her testimony wasn’t allowed to come in before because it wasn’t as relevant,” California entertainment lawyer Mitra Ahouraian told the Post. “That’s one mistake that [Heard] made, was bringing up Kate Moss, which potentially opened the door to [Depp’s team] bringing [Moss] on as an impeachment witness,” which could, in turn, offer Moss the possibility of denying the story.

At the time of writing, it is unclear whether the judge will allow further mentions of Moss. However, this did not stop TikTok commenters from offering their own takes on this new development.

“I hope they call Kate Moss,” a commenter wrote.

“Ouuu this is going to get spicy,” another added.

Above all, many were surprised Moss was mentioned at all.

“​I cant believe her lawyers didnt tell her not to talk about the past,” a user shared. In response, the duo wrote, “Oh, I’m very certain they did tell her not to do that but she didn’t listen.”

The Daily Dot reached out to Ashleigh and Maclen via Instagram direct message.