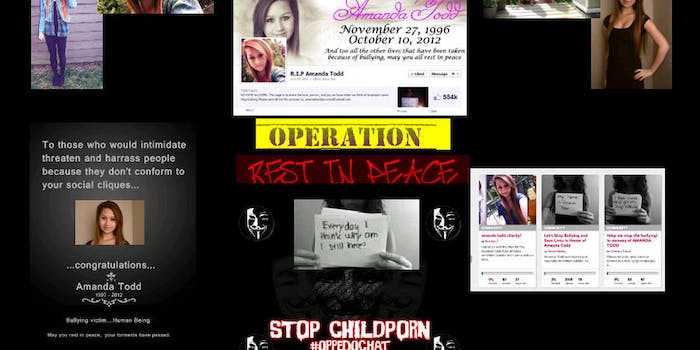 The group has released a dump of largely circumstantial evidence that points to a 32-year-old man near Vancouver, Canada.

In what they’re calling #OpRIP, the group has gone after the man they claim blackmailed her and tormented her to the point of suicide. For bonus points, they’ve hacked the Twitter account of a man who posted what he said were photos of the autopsy.

The hunt is being led by NJAnon, a lesser-known anonymous account with a strong anti-pedophilia focus and only 100 followers. Their motto is the threatening, “Because none of us is as cruel as all of us.”

A Vancouver-area man named Kody Maxson just found out what that really means.

In a single image, NJAnon collated what it said were Maxson’s pseudonymous (and apparently recently altered) Facebook account, his uploads to a Web forum called Jailbait Gallery, his address, a Google street view image of the house, conversations in which Maxson is berated for lying about his age on BlogTV, his Google+ account, his alma mater (a school for youth with emotional and behavioral issues) and more.

The Pastebin includes links to his Facebook photos (now set to private), lists of his social media accounts and accounts on teen pics sites sites and sites like Jailbait and Teenhut, among other details. Back in March someone uploaded a chat snippet to Pastebin that seems to show Maxson threatening a teen. Although there’s a censored picture of Amanda Todd apparently flashing the camera, there’s nothing in the roundup image or pastebin that specifically ties Maxson to her case. He was seemingly in certain places online at certain times doing certain activities that got him called out, but as is often the case, the web is mystifyingly short on specifics.

CKNW news radio went to Maxson’s house and attempted to interview him, but another resident told them no-one by that name lived at the house. When a CBC camera crew showed up, no-one answered the door.

We caught up with NJAnon on Twitter, where they admitted they’d gotten the address wrong. “i knew he was in vancouver but not certain where exactly. i think its fine now though since the police know about dakota’s connection to amanda.”

We asked how they gathered all the material, to which they replied: “lol google is more powerful then [sic] people perceive.”

Surrey Provincial Court records show that yesterday someone named Dakota William Shain Maxson appeared before a judge to face charges of sexual assault and sexual interference of a person under 16. The location of the offences is listed as Surrey, which is also the Vancouver suburb most frequently referenced by his transit-obsessed Twitter account.

Vancouver defense lawyer Eric Gottardi objected to Anonymous’ action Monday, telling the CBC, “The system isn’t supposed to convict someone before charges are laid. It’s not supposed to be judge, jury and executioner, all in the public forum. We have a justice system. It’s supposed to work, it does work.”

The Royal Canadian Mounted Police reportedly have two dozen officers working on the Amanda Todd case, trying to find out who was behind the relentless, ultimately fatal campaign to target the fragile teen.

While waiting for the wheels of justice to grind their way through those cases, activists have not been idle when it comes to taking on trolls.

Teenager Alex Ramos uploaded and shared photos he claimed were of Todd’s autopsy. The coroner, however, has claimed that no autopsy has yet taken place. Anonymous was in a bloody-minded mood, and hacked the teenager’s Twitter account. It now reads: “Seized by Anonymous. Respect The Dead Next Time Alex Ramos!”

Meanwhile, a concerned mother from Calgary has singlehandedly cost another troll his job, tracking him down from offensive Facebook comments on Todd’s memorial wall and calling up his employer.