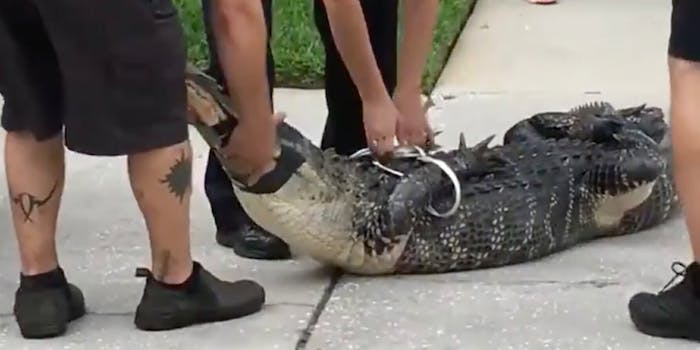 The gator tried to make a run for it—with his hands tied.

An alligator reached viral stardom on Thursday when he tried to escape his handlers with his hands tied behind his back—and head-butted a trapper unconscious in the process.

The nine-foot gator was apparently roaming around an Orlando neighborhood (which is a regular thing in Florida) when some police and a trapper managed to wrestle him and down and hogtie his limbs, Vice reported Friday.

Things seemed to be going according to plan—the trapper even daringly tapped on the alligator’s head, which according to Twitter is a way to disorient the beasts. But as the gator was hoisted onto a truck, he made a last-ditch effort escape and head-butted the trapper. According to WCMH-TV, the man was “out cold” for four seconds.

An alligator roaming through a central Florida neighborhood head-butted a trapper, knocking him out cold in a last-ditch effort to escape. https://t.co/ZkGU5QYwaF pic.twitter.com/YzZNP26iug

In the end, the alligator was successfully captured with the help of a winch.

Luckily, the incident was far from the worst giant lizard news today.