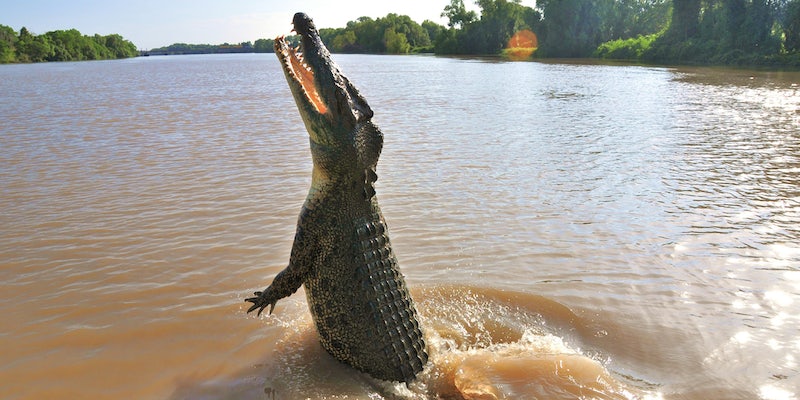 Crocodile eats internet-famous terrier after a decade of taunting

'It had a high probability of it happening at some time.'

This article contains depictions of graphic violence against animals that some readers may find disturbing.

Local Australians watched in horror as a crocodile snapped up a little terrier named Pippa on Thursday, according to ABC Australia.

A video posted by the Australian affiliate shows guests gathered at Goat Island Lodge, just south of the Northern Territory capital of Darwin. There, they watched Pippa perform her favorite trick of barreling at the crocodile—whose name is Casey—to scare her off the banks. This time, however, Casey fought back, snatching Pippa and dragging her into the Adelaide River.

(Warning: This video is graphic.)

Understandably, many folks who’ve watched the video have been horrified to see the end of Pippa—but there’s always two sides to every story. Casey reportedly suffered through over a decade of tormenting from Pippa, who regularly scared Casey back into the river.

The owner of both animals, Kai Hansen, said while he’s sad about the loss of Pippa, he doesn’t blame Casey because she only “did what crocs do.”

Saltwater crocodiles are the largest of all living reptiles and the largest riparian predator in the world. Saltwater crocodiles are known to be incredibly opportunistic carnivores, who ambush their prey before typically swallowing them whole, according to Aquatic Community. They can prevail over almost any animal that enters its territory, including sharks, and are regarded as the most dangerous crocodile to humans.

So, basically, Pippa had it coming.

“In the early days she actually had a go at me a couple of times,” Hansen said. “These days I just throw food out from up the top and no one is allowed to walk down there.”

For many who watched the video online, the real antagonist in this story is Hansen—who knew about Pippa’s bad behavior and even seemed to encourage it.

Kind of irresponsible for the owner to let his dog get this close to a gator/crocodile – poor dog.

Feel sorry for the dog but the owner deserves to between the crocodile's jaws for being irresponsible for the dogs safety.

UM THIS GUY SHOULDNT BE ALLOWED TO GET ANOTHER DOG. HOW ABOUT DONT LET YOUR FUCKING DOG NEAR THE CROCODILE IN THE FIRST PLACE YOU ABSOLUTE SOCIOPATH. pic.twitter.com/ttdssi3MvC

But Hansen said Pippa’s actions were just a part of her nature to chase bigger animals.

“Crocodiles have all the time in the world,” he said. “[Pippa] just couldn’t help herself … It was very unfortunate. It’s something that I wouldn’t say inevitably had to happen, but it had a high probability of it happening at some time.”

This has been a particularly odd week for animals in the Australian news. Earlier this week, a woman was arrested in Queensland for trying to enter a liquor store atop a horse while four times over the alcohol limit and two pigs who escaped from their home on Tuesday were found napping at a gas station.

Editor’s note: This article has been revised to remove similarities to ABC’s original report.