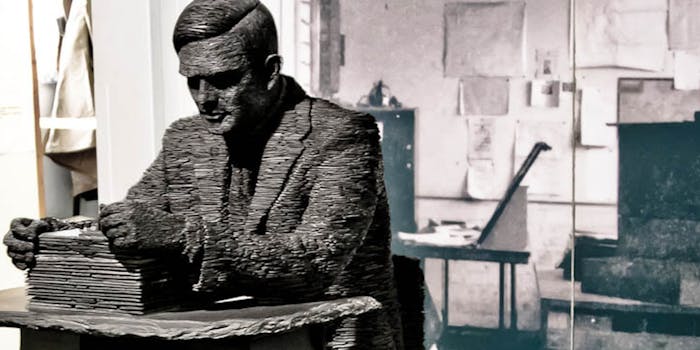 Father of modern computing posthumously pardoned for being gay

But his acolytes argue that the Queen's words send the wrong message.

Turing, who developed a machine to decrypt Nazi comminuqués but is arguably better-known for the A.I. test that bears his name, in which a blind observer tries to distinguish between machine “behavior” and human responses, never made a secret of his sexuality. After the trial, he had his state security clearance revoked and was made to undergo an experimental hormone therapy likened to chemical castration. Two years later, he poisoned himself with cyanide, though scholars have argued his exact motivations for doing so.

Computer scientists and other leading figures have long campaigned for some redress, which was “granted under the Royal Prerogative of Mercy after a request by Justice Minister Chris Grayling,” per the BBC, which quotes Grayling as saying that “Dr. Alan Turing was an exceptional man with a brilliant mind,” one who “deserves to be remembered and recognised for his fantastic contribution to the war effort and his legacy to science. A pardon from the Queen is a fitting tribute to an exceptional man.”

At his memorial in Manchester’s Sackville Park, tokens of affection piled up:

Rather than put the entire shameful matter to rest, the pardon kicked off a new dialogue about cultural oppression and gay rights. Some saw the token gesture as too little, too late, while others considered it legally inappropriate: instead of condemning the backwards law, or pardoning everyone found guilty under it, Turing is singled out as “one of the good ones.” Andrew Hodges, author of a definitive Turing biography that enjoyed a startling Amazon sales spike on the news, crystallized this reaction to the “well-intentioned” psuedo-apology:

If anything, it suggests that a sufficiently valuable individual should be above the law which applies to everyone else. It’s far more important that in the 30 years since I brought the story to public attention, LGBT rights movements have succeeded with a complete change in the law—for all. So, for me, this symbolic action adds nothing. A more substantial action would be the release of files on Turing’s secret work for GCHQ in the cold war. Loss of security clearance, state distrust and surveillance may have been crucial factors in the two years leading up to his death in 1954.

A few of Turing’s codebreaking papers were declassified last year, and Grayling, to his credit, did characterize the indecency conviction as “wrong” and “discriminatory.” Still, a “statutory pardon” scans as insult to the non-exceptional victims of an unjust society, even if many conflicted by the announcement also expressed the optimistic view that the U.K. is becoming more tolerant. There was one final irony, however, for the tragic godfather of modern computing:

Sounds like there’s more than one way to revise history.