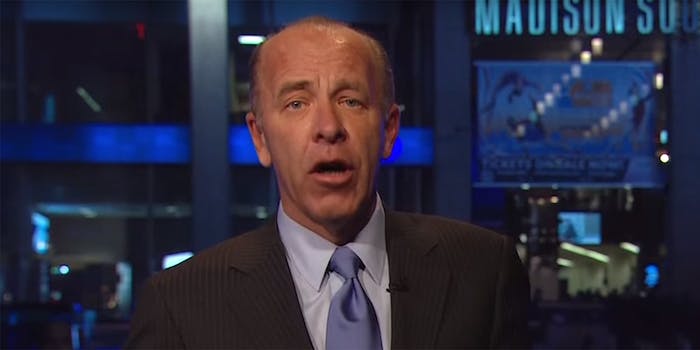 Al Trautwig, the veteran sports announcer whose cameo in the hit Disney bobsledding film Cool Runnings (1993) is likely the most impressive achievement to any millennial reading this, is having a very bad Olympics.

How's your life going compared to mine? https://t.co/dJi8aAsbDu

To be fair, Trautwig—whose name, let’s be honest, sounds more like a Pokémon than a person—struggles even with his routine job of NHL and NBA analysis, like when he actually called up the elderly parents of a troll who called him a “moron” on Twitter after taking the time to track down their phone number. But something as big as the Olympics provides a lot more exposure, room for cringeworthy mistakes, and, well, engagement.

Perhaps it’s the pressure of being a semi-known, verified TV personality on Twitter with 20K followers that prompts Trautwig to lash out at virtually anyone who takes the time to impugn his work. In any case, this behavior culminated on Sunday night when he absurdly refused to characterize U.S. gymnast Simone Biles’ adoptive parents (her maternal grandfather and his wife) as, you know, her parents. Viewers were less than happy.

.@AlTrautwig Would love to hear an apology to adoptive parents everywhere. I hope this has been a learning experience for you.

That deletion proves Trautwig has at least some sense of self-preservation, but the rest of his timeline over the past week is an incredible journey from the cheerful arrival in Rio to sparring with any and every Olympics viewer with an off-the-cuff remark about his talents or demeanor.

I am on a line at least a half mile long to Opening Ceremony. FUBAT. pic.twitter.com/aapcoeW0E6

Geez Rebecca get over yourself. We were talking team finals. https://t.co/xy6mDfWKI6

Then you should be done by now.

Eeyore? I don't talk over the routines. Have another drink with grandma. https://t.co/MISQUQ2GAI

Ok because the life am seeing really sees no end game of intelligence. https://t.co/u2eMHqMlZL

Hot damn, this is a man who 1) writes “FUBAT” instead of “FUBAR” and 2) has no problem telling his critics they should be dead. What will he do next? Because the burns are coming faster than he can possibly reply.

The greatest Olympic mystery: How can Al Trautwig still know so little about gymnastics after covering it for 16 years?

I'd rather hear John Tesh make creepy comments while playing his music than @AlTrautwig on commentary. #Rio2016 #littlegirlsdancingforgold

Do they give Al Trautwig a cliche journal or do you think he just come up with that crap on his own? #Rio2016

God Al Trautwig is such a piece of shit

Savage. Still, it’ll all blow over soon enough, and then Al can get back to figuring out how to upload the photos he’s talking about in his tweets.

Olympic history quiz. Who is that On the right in that picture?

Keep reaching for that gold.

Update Aug. 9, 10:59am CT: Under fire for his comments about Biles’ parents, Trautwig issued an apology. Per the Wall Street Journal:

“I regret that I wasn’t more clear in my wording on the air,” he said in the statement. “I compounded the error on Twitter, which I quickly corrected. To set the record straight, Ron and Nellie are Simone’s parents.”

Good. Now that that’s cleared up, he can get back to his regularly scheduled beefs.