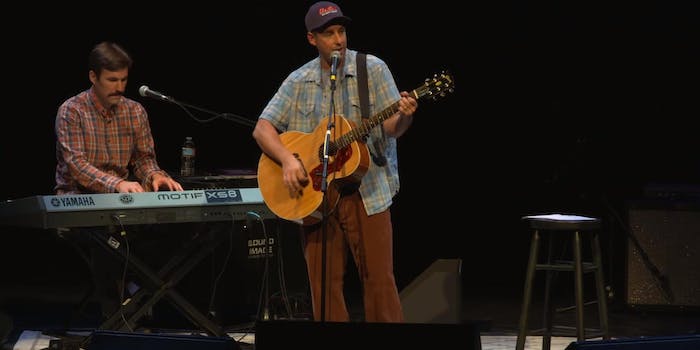 The holiday tradition is back.

Sometimes you listen to the fourth version of Adam Sandler‘s Chanukah Song seven times in a row, because you’re writing a quick article on it, and you want to make a list of all the celebrities involved this time around. When you’re finished, you wonder, ‘Huh… When did the first version of this song come out? Was it 1996? Could it be? How… how old have I become?’

And then you watch the fourth version of the song for an eighth time, because you’re pretty sure that you’ve missed somebody. Plus—at this point—let’s face it: Chanukah Song is now a Holiday tradition. It just fucking is. And as a holiday tradition, it’s probably one of the greatest ones out there.

Here’s the latest take on the tune:

If you missed some of those names, don’t worry: I’ve listed them all below. I’d originally made my own list, but then I needed to find out the original’s release date. I was off to Wikipedia.

Still hurting from that kick to the gut, I see that somebody has already written down the fourth version’s Jewish celebrities. I’m pretty sure that my own list is just as (and maybe even more) accurate—but I used Wikipedia‘s instead, though.

And, why? Because of responsibility—whenever possible, you want to shed having any of that stuff on your shoulders.

That said, here’s a list of celebrities that the fourth version of Chanukah Song mentions (and if any are missing/wrong: take it up with the Wikipedia people):

And now, when you hear the song’s fourth and newest version start to play somewhere—and, ohhhhh ho ho!, it can play anywhere and it certainly fucking will—you can bring this page up on your phone and pretend to sorta know the words.

Although… maybe you really should know the words. This is the closest we’ve seen to a seasonal folk song since Robert Earl Keen’s Merry Christmas from the Family (here’s an acoustic version—drink eight whiskeys and try to not cry while it plays).