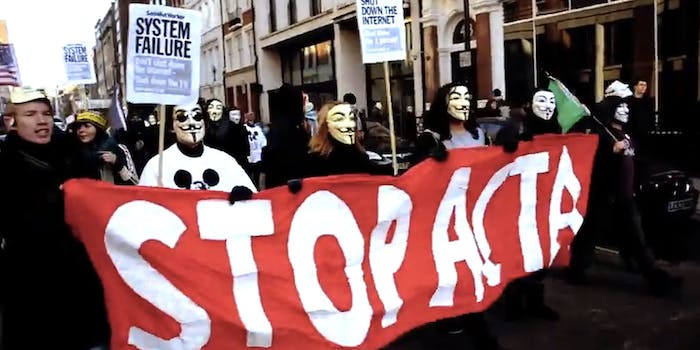 Internet activists in 58 European cities will stand in solidarity against the Anti-Counterfeiting Trade Agreement on June 9.

Internet activists in 58 European cities are preparing for what will likely be the largest physical protest for cyber rights in history.

On June 9, a march will be held in oppostition to the Anti-Counterfeiting Trade Agreement (ACTA), a massive, multinational agreement that regulates intellectual property, among other things. That regulation extends to online piracy, and ACTA’s critics say the agreement would give involved government bodies draconian powers to search for and punish possible offenders.

A number of countries, including the U.S., Canada, Japan, and Australia, have already signed ACTA. Europe’s participation is an all-or-nothing deal. The entire European Union will either sign or reject it. David Martin, the EU’s dedicated advisor on ACTA, recommended in April that the EU reject the agreement, but there’s no telling yet if voting countries will heed his advice.

The protest is being tracked by stoppacta-protest.info, a website with a Google map detailing each of the planned events in the 13 countries. André Wolski, a member of the German Pirate Party, helps run the website.

“There is not *one* organisator,” Wolski wrote told the Daily Dot. “The local organisation of each demo is mostly done by local groups of rights activists, Anonymous, parties, youth organisations, and students’ unions.”

That means, Wolski said, that there’s no telling just how many people will turn up in total. An anti-ACTA protest in Poland drew an estimated 15,000 people in January.

Most participating cities have dedicated Facebook events. No city has more than a thousand people signed up—Bremen, Germany is the closest with 757,—and commitments in several cities, such as Odense, Denmark, are in the single digits.

To be fair, though, who RSVPs to a protest via Facebook, especially when it’s more than a week away?

Even though the June 9 date is firm, the EU’s vote on ACTA is not. According to various reports, the agreement is expected to go before a final vote sometime in July.