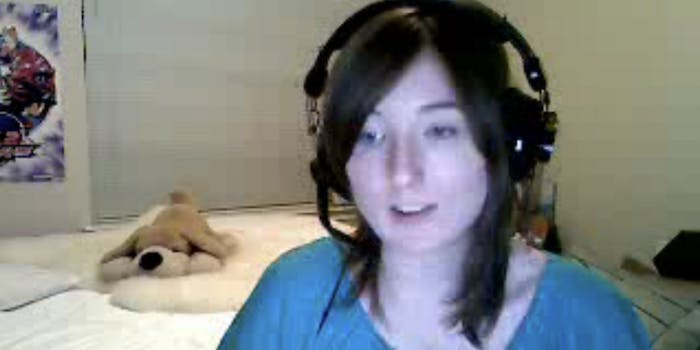 A daughter who posted a video of her father beating her held nothing back in a chat Thursday night.

Today, Hillary Adams revealed all. Between bites of yakisoba, the abuse victim spoke about everything from her father, Judge William Adams, to Justin Bieber.

As promised, Adams appeared in a Vokle chat  to answer questions live at 7 p.m. Central Time. Fifty-eight people stopped by the chatroom to watch Hillary’s video stream and type their questions. Although Adams recently rose to fame after posting a video of her father, a Texas judge, beating her violently, her chat touched on everything from Sonic the Hedgehog to Anonymous.

The Daily Dot stopped by to listen in. Adams was still chatting as we filed the story an hour and fifteen minutes later. Here are a few soundbites that caught our ear.

On her father’s position in the community: “He knew everyone in CPS, [Child Protective Services] everyone on the school board, everyone in the courtroom. One night my mom was feeling very threatened by him so she called the police. When they arrived, Dad stepped outside to talk to them for a minute, and they just left. Just like that.”

On her little sister: “Right now, my mom is trying to get custody to remove her from my dad. Recently, my dad cursed her out for gaining weight. She’s going through puberty, so weight gain is normal. He said, I’m going to curse now, ‘Fuck you, you’re fucking fat.’ You don’t say that to a ten-year-old!”

On seeing her dad cry: The one and only time i saw him completely bare his soul was when our Blue Heeler got accidentally run over in the driveway. He was coming back from a hunting trip. He liked to hunt deer and quail. It was an accident, his truck ran right over, we all watched her die. Losing a family pet like that… [trails off] I’m sorry.”

On Judge Adams’s career: “It’s over. Probably. Even if he keeps his job, people won’t ever take him seriously again. If I were him, I would probably just retire.”

On her story being taught in schools: “I heard about college professors and teachers talking about this, and I found that amazing. Abuse needs to be talked about and taught in schools and health class. Right up there with sex ed. People need to know what abuse and manipulation look like so they know when to reach out. Because I didn’t.”

On employment: “I’m in between jobs. I’m kind of ashamed… I worked at a GameStop for three years. Last week, I had a breakdown and started crying in the middle of the store. I put in my notice that day.”

On Anonymous: “They’re a force to be reckoned with… One of the text messages I got from my father, half an hour after I posted the video to Reddit, he texted me: ‘Hillary take that video down and tell your friends to stop sending threatening text messages to the courthouse. I said, ‘Dad, I’m not sure you understand how the Internet works. The train has left.’ That’s when things got real.”

On children: “I’m kind of scared of having kids. There are things I need to work out with myself before I consider myself mother material. I never get along with kids and that can’t be natural. I think it would be cool to reproduce. I want to want children, really.”

On Justin Bieber: “I don’t think he needs to be made fun of. He just makes music. He’s just doing what he does and none of this is his fault.”

On her favorite Reddit sections, or subreddits: “I like r/atheism, r/adviceanimals, and I kind of just browse the front page. I like to look at the new page because I feel important and say ‘Upvote for you! Nope, downvote for you.’”