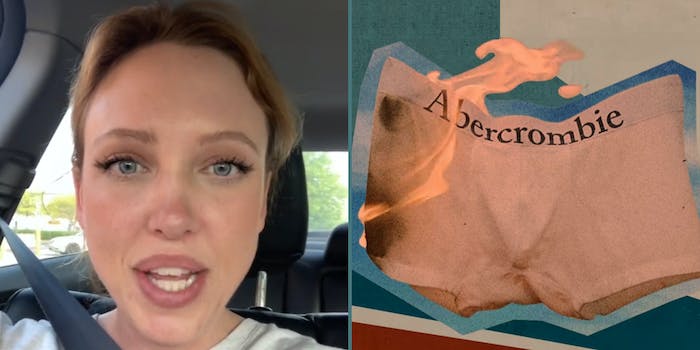 White Hot: The Rise and Fall of Abercrombie & Fitch/Netflix

‘You guys would freak out if you knew the sh*t that they made us do’: Former Abercrombie & Fitch manager says she had to put unattractive workers in the back

'Every single thing on that documentary was not only true…they left some parts out.'

This week, a TikToker created a multi-part series exposing alleged discriminatory hiring, scheduling, and termination practices which she says took place when she was working as a manager at Abercrombie & Fitch in the early 2010s.

In her first video, Kirby Mansour (@kirbymansour), a TikTok creator with over 30,000 followers, explains she was inspired to launch her storytelling series after watching the Netflix documentary, White Hot: The Rise & Fall of Abercrombie & Fitch. The documentary, which was released last week, exposed discriminatory, racist, and fatphobic hiring practices and dress codes at the popular clothing retail chain Abercrombie & Fitch during the 1990s and early 2000s.

“When I tell you every single thing on that documentary was not only true…they left some parts out,” Mansour says in her video. “When I tell you you guys would freak out if you knew the shit that they made us do.”

In a follow-up video, Mansour alleges she was a manager from 2011 to 2013 at Abercrombie & Fitch, and she was shocked by the company’s hiring practices of only allowing “good looking people” to become employees.

She claims during her time as a manager, there were employees who were strictly delegated to the front or back of the store based on how they looked. Those who were deemed not attractive enough to be at the front of the store were allegedly phased out of scheduling.

In another video, she claims the dress code was incredibly strict, forcing her to choose from a catalog of outfits composed head-to-toe with Abercrombie & Fitch products—which she had to pay for herself.

Mansour also claims the company dress code prohibited colorful makeup or nail products. She says one employee was repeatedly criticized for wearing fake nails, despite being conventionally attractive and going on to compete in the reality television show America’s Next Top Model.

“They were so focused on all the wrong things. It would just blow my mind,” Mansour says in the video.

TikTok users said they were captivated by the video series in its comments section.

“I’m pulling up a chair for this tea session,” one user commented.

“Keep the stories coming! I want to hear anything!” another replied.

Others went to the comments section to share similar experiences with the company.

“I was a model and that’s when the body dysmorphia began,” one user shared.

Accusations against Abercrombie & Fitch also arose on TikTok in 2021, when a former employee described elitist and discriminatory labor practices at the company, according to reporting by the Daily Dot.

Many in the comments section of Mansour’s series said they were repulsed by past experiences of discrimination at Abercrombie & Fitch, and debated whether the company has really changed in recent years.

“I watched it and it kinda made me wanna never buy anything from them again,” someone commented. “I search their insta and it looks like it’s better now?”

In a recent Instagram post by the company following the release of the scathing documentary White Hot, Abercrombie & Fitch CEO Fran Horowitz made the following statement:

“We want to be clear that the recently released documentary is not reflective of who we are now. We own and validate that there were exclusionary and inappropriate actions under former leadership. Since I became CEO in 2017, we’ve overhauled Abercrombie and transformed with intention into a place of belonging. We’ve evolved the organization, including making changes in management, prioritizing representation, implementing new policies, re-envisioning our store experiences and updating the ﬁt, size-range and style of our products.”

In a third video, Mansour tells her followers that despite the discriminatory practices she witnessed 10 years ago, she believes Abercrombie & Fitch is a “completely different” company now and has become more size inclusive and diverse.

However, in another one of her videos, Mansour said she is going to continue telling Abercrombie & Fitch stories on her TikTok account.

“I have stories for days. I’m just going to keep posting about it because it just keeps going,” Mansour said in the video.