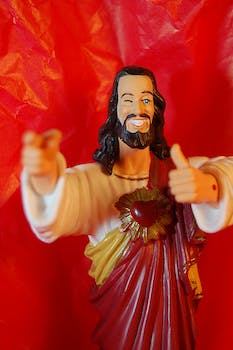 Ever wonder what Jesus would do...online? Here's a few ideas.

What would Jesus be like if he came to earth today? If you’re a Christian theologian or a kid forced to attend Sunday school, you’ve surely pondered the question. And if you were a teenager forced to attend my particular Sunday school, you felt intense, cringing embarrassment on behalf of the well-meaning but catastrophically clueless grownups who portrayed Jesus as “relatable” and  “cool” and prone to using teenage slang at least three decades out of date. (For the record: I am not disputing my former youth group chaperone’s assertion that Christ would appear “on the MTV.” I’m just saying that doesn’t make him “groovy to the max.”)

For those still wondering what Jesus would do today, German archbishop Robert Zollitsch has the answer. This past Christmas Eve, Zollitsch told a German newspaper that a modern Jesus would have a strong online presence. “Jesus would certainly today be on Facebook and Twitter. […] He was always looking for people, and took unusual routes to do this,” Zollitsch said.

As a former Sunday-school inmate I say: this makes perfect sense! If the Pope can have a Twitter account, why not the Pope’s boss, too?

Of course, this leads me immediately to the question of what he’d actually post. The original Jesus wasn’t exactly respectable by the standards of his day; he went out of his way to minister to people like lepers, prostitutes, and tax collectors—i.e., the lowest, least-respected members of society. Today’s Internet equivalent would presumably be trolls, hackers and spammers. What would he tell them? Most Bible verses would still work today, with only minor tweaking.

Trolls under bridges. The original Jesus promised worshippers that they could live in his Father’s house someday:

“In my Father’s house are many mansions: if it were not so, I would have told you. I go to prepare a place for you.”

However, trolls are reputed to live not in houses but under bridges, so the original Jesus quote would require some minor tweaking:

“Under my Father’s bridge are many rooms. If it were not so, I would have told you. Or maybe not—trolls aren’t exactly known for honesty and forthrightness, after all.”

No money-changers (or ads). The New Testament says Jesus hated the money-changers and dove-sellers and drove them out of the Temple, outraged that God’s house should become a place of commerce and profit. Facebook Jesus would boycott the advertisers, outraged that Twitter, Instagram or other websites should turn a profit for their owners.

“You have turned my Father’s Tumblr into a marketing campaign,” CyberJesus would rage. “Information wants to be free!”

LoavesofBreadandSmallFishBlog.com. The original Jesus, with God’s help, transformed five tiny loaves of bread and two small fish into enough to feed a hungry multitude. Which would drive today’s food bloggers and health nannies absolutely bugnuts, because the fish is full of mercury and the bread full of gluten, and feasting only exacerbates the “obesity epidemic” which drives up public health costs.

So today’s Jesus wins fame and popularity when he takes enough food to feed a hungry multitude and, miraculously, shrinks it down to just five tiny loaves and two small fish.

“Lead them not into temptation, for they know not what they do, though their growing girth suggesteth it wouldn’t hurt them to skip a few lunches, if you catcheth My drift. For Man does not live by bread alone but also salads and other fiber sources, else he become both constipated and fat, and driveth up his health insurance premiums, yea.”

Water into weed. Old-school Jesus’ first miracle was turning water into high-quality wine at a wedding party where guests were in danger of running low on intoxicants. That was a perfectly cromulent miracle for people living in the Roman Empire, but in today’s America, producing and distributing alcohol without several government-issued licenses is massively illegal, along with serving any to minors. (The ubiquitousness and affordability of Two-Buck Chuck make such wine-producing miracles unnecessary anyway.) But Jesus was also known for healing the sick.

Combine this with his ability to miracle things into existence and his contempt for mean-spirited bullshit authority, and he could win a lot of devoted converts in medical marijuana states or any party where I’ve been invited. Anybody who can take the half-charred contents of a one-hitter and miraculously increase it so the entire multitude, or at least me and all my friends, could get good and baked would win our undying love and affection, thousands of “likes” on Facebook, and an invitation to join Willie Nelson’s Teapot Party.

“And the hostess of the party sampled the char that had been turned into kind bud. She did not realize where it had come from, though her friends who had packed the bowl knew. Then she called Jesus aside and said ‘Everyone brings out the choice weed first and then the cheap shit after the guests are already wasted, but you have saved the best till now’.”

Privacy online. Original Jesus: A strong privacy advocate who believed people should keep their relationship with God on the down low. The Bible quotes him as saying this:

“And when you pray, do not be like the hypocrites, for they love to pray standing in the synagogues and on the street corners to be seen by others. Truly I tell you, they have received their reward in full. But when you pray, go into your room, close the door and pray to your Father, who is unseen. Then your Father, who sees what is done in secret, will reward you.”

Would modern Jesus apply this same standard to his social media accounts? Possessing divinely miraculous powers is not mandatory for anyone trying to keep ahead of Facebook’s ever-shifting privacy standards, but Jesus should, hopefully, be much better at it than any mere mortal can ever dream of being.