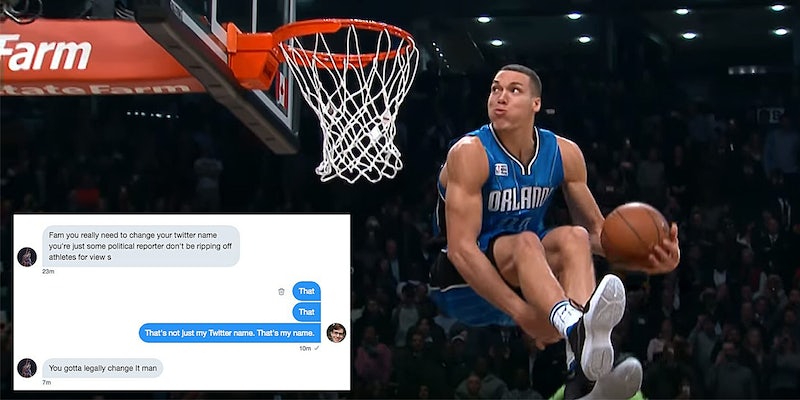 Would an Aaron Gordon by any other name dunk as sweetly?

Aaron Gordon, who plays forward for the Orlando Magic, might be an extraordinary talent, but he doesn’t have an extraordinary name. In fact, both his first and last names are pretty common. There is, for instance, a writer who shares the name on Twitter. That was apparently too much for one basketball fan, who sent the reporter a direct message insisting he change his name.

“Fam you really need to change your twitter name you’re just some political reporter don’t be ripping off athletes for view[s]” the man wrote to Gordon in a direct message.

Gordon tried explaining that it’s not just his Twitter name, but his actual real name. He even has his middle initial “W” as part of his profile name. The basketball player’s middle name is Addison.

But no matter what Gordon said to the man (whose profile picture, by the way, is a photo of Wilt Chamberlain) was just not having it. “You gotta legally change it man” he said. “In order to become a legitimate Twitter account you need to create your own personality, not simply but [sic] others for attention”

Not surprisingly, this isn’t the first time Gordon has had to deal with his namesake’s rising fame. He wrote an article about it back in 2013. In the article, Gordon says when basketball Aaron Gordon began to become famous, his only regret at the time was not purchasing aarongordon.com. A domain name that, coincidently, seems to be available at the moment.

“It seemed silly to suggest the alphabetical contents of your name carried any greater significance,” Gordon wrote “and the mere fact that another individual on this planet is named with the same set of letters in the same order is a statistical accident.”

As if all this wasn’t weird enough, at some point, the 6’9″, 220 lbs basketball-playing Aaron Gordon got involved.

Leading to one final exchange between reporter Aaron Gordon and his detractor.

So was it all a scheme by “Money_Buckets23” to achieve viral fame? Did he criticize someone else for trying to get more views on Twitter while that was his own plan all along? We may never know for sure, but what’s unmistakable is that both Aaron Gordons came out of this looking like winners.

Oh and Michael B. Jordan, consider this fair warning. Money_Bucket23 might be coming for you next.