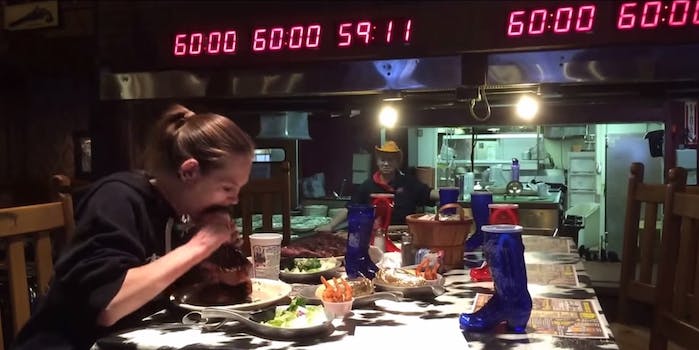 Woman eats 9 pounds of steak in less than 20 minutes

She didn't even have time for a fork.

When you sit down to a nice, thick, juicy steak, chances are you’ll want to enjoy every bite of it. Additionally, chances are that your steak will not outweigh a newborn baby.

A YouTube video of Schuyler’s impressive eating skills has surfaced that shows the Nebraska native effortlessly putting away two 72-ounce steaks—that’s nine pounds of meat—in less than half an hour.

The feat occurred at the Bug Texan Steak Ranch in Amarillo, Texas. No word on if Schuyler followed it up with a 50-ounce baked potato.

My sincerest apologies go out to the late, great John Candy, who was only able to scarf down a mere 96-ounce steak (“The Ol’ 96er”) in the 1988 comedy The Great Outdoors. You have been bested, good sir.