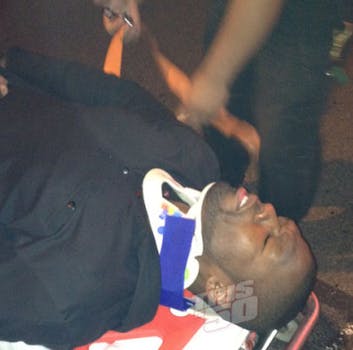 The rapper was hospitalized early Tuesday morning after being rear-ended on Long Island Expressway.

50 Cent has more lives than a cat.

Early Tuesday morning the rapper was hospitalized after his bulletproof SUV was rear-ended by a truck on the Long Island Expressway, ThisIs50, the rapper’s blog, reported.

“(50 Cent) was taken to New York Hospital Queens where he was treated for minor neck and back injuries,” a spokesperson for 50 Cent told the Daily News Tuesday. “He was released this morning and is doing fine.

The rapper, who was shot nine times in 2000, has yet to break his silence on Twitter, where he has more than 6.7 million followers.

Photos of the rapper lying on a stretcher have circulated around the Web with fans, including businessman Russell Simmons. 50 Cent has been a trending topic all morning on Twitter, collecting more than 11,000 mentions.

“Those big rig drivers in New York drive crazy,” tweeted @Atoosa72. “[L]ost a relative to an accident caused by one. Get well soon, Curtis Jackson (50 Cent).”