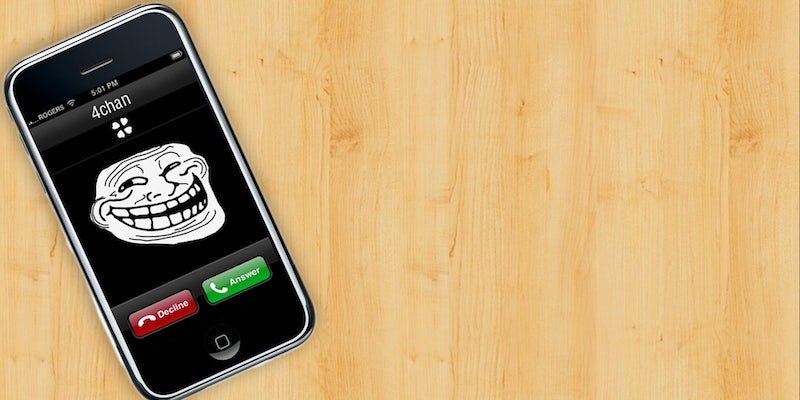 4chan's /b/ is one of the most disgusting forums on the Web. This is what happens when it gets a hold of your cell phone number.

When 4chan pranksters started bombarding my inbox with spam emails for women’s lingerie, I laughed. They were easy enough to ignore, and it made for interesting small talk.

When they ordered two large pizzas and more than three different magazines to my parent’s home, I got little more annoyed. The jokes were jumping offline and landing on my doorstep.

Then they finally tracked down my cellphone number Monday and left me this voicemail.

Transcript: “Umm yeah, hello, this is Mohammed. I’m here to return your call. I don’t know who the f**k you think you are but Charles is going to f**k you up.”

This is what comes with reporting on the 4chan’s most notorious community /b/, a pornographic pit of obscenities, controversial pranks, and violent photos. It’s nothing new. As Cole Stryker, author of Epic Win for Anonymous: How 4chan’s Army Conquered the Web, told me last year, he “received pizzas and death threats, the usual.”

My stories on a seemingly random 39-year-old named Charles, however, pissed /b/ off like never before.

Charles’s saga started on the night of July 15. The prank began like most others, with a call to action: to help Charles crush the dreams of “teeny boppers” by manipulating a Kiss 108FM contest to meet Taylor Swift. 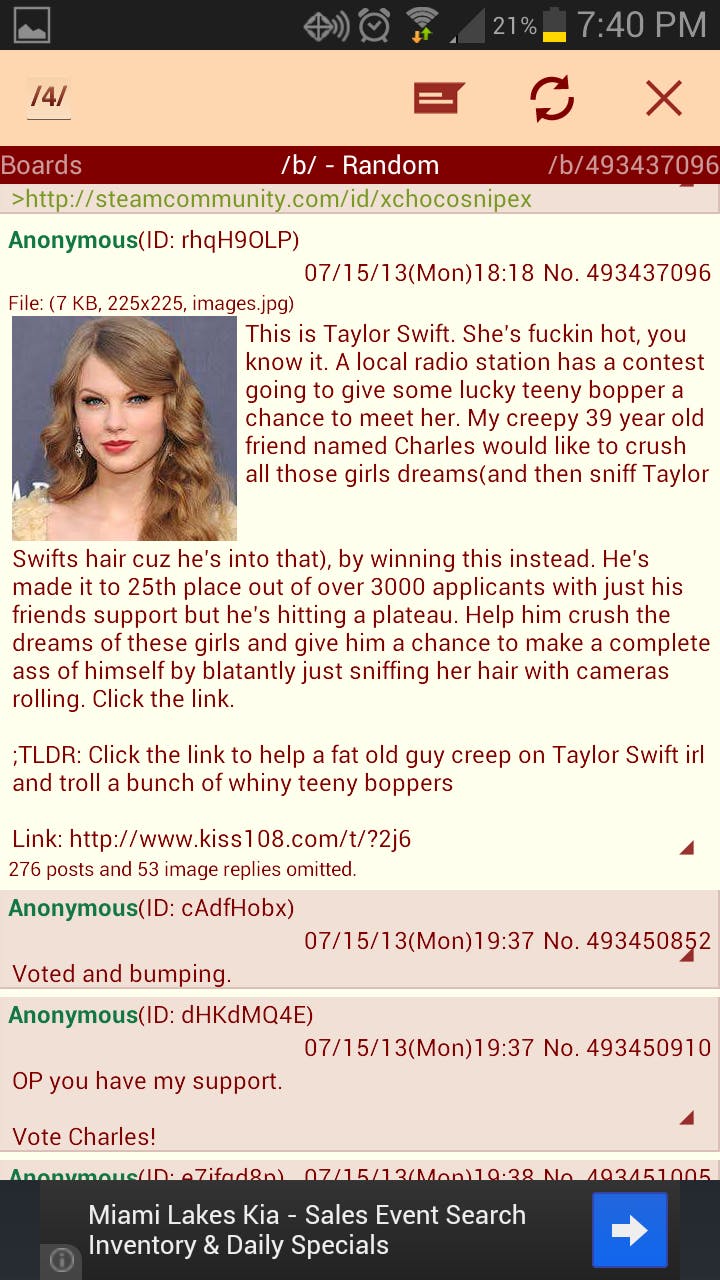 In less than 24 hours, Charles had captured the top spot. In celebration, one /b/ user created the following tribute video, which has since collected more than 13,000 views.

While /b/ enjoyed its success, I received the following emails from 4chan users supposedly named Alex Kapelanski, Anthony Bacher, and Joe Ratajzcak, accusing me of having sexual fantasies about Taylor Swift, of being a “fucking f****t,” and of having no fun in high school. Most of them warned me about an imminent “shitstorm.”

As has been the case with nearly all of /b/’s most recent pranks, Charles’s failed. By the weekend, Boston’s Kiss 108FM had caught on to /b/’s ways and shut the contest down. The forum launched a Twitter hashtag #justice4charles, while a Facebook page under the same name collected 1,240 likes, And a Change.org petition garnered 196 votes from people calling for Kiss 108FM to reverse its decision.

On Sunday, my father text-messaged me the latest magazine he had just “accidentally” received in the mail. 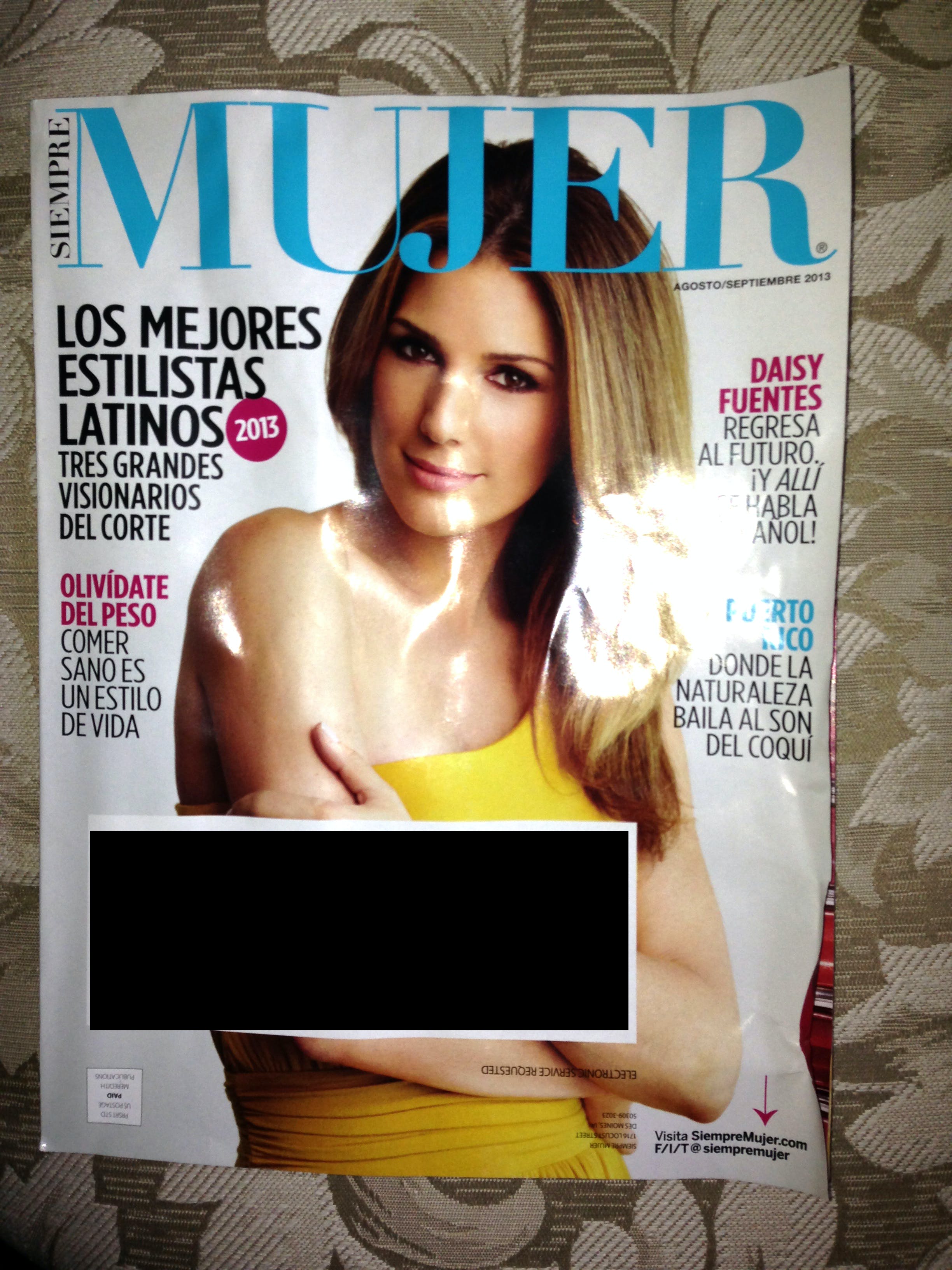 Obviously, /b/ wasn’t finished. On Monday the community rallied behind Charles once again to help him win a chance to meet singer Selena Gomez. The contest was being hosted by Kiss 108FM’s sister station Z100. A few hours after publishing our story that morning, Z100 closed the contest early—with Charles sitting in sixth place. 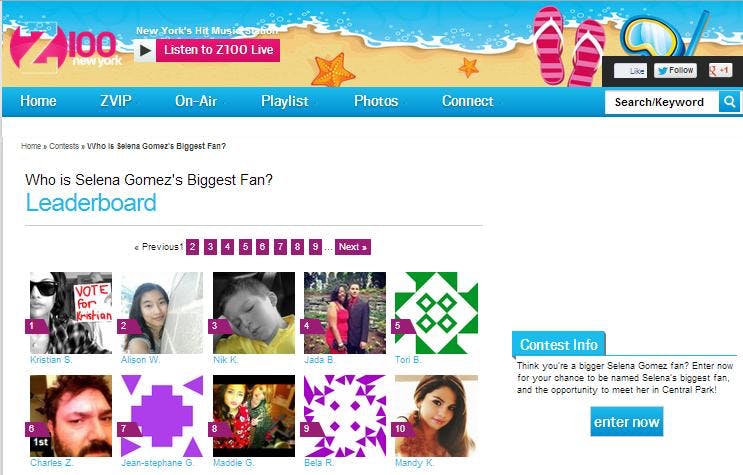 Then the phone calls started pouring in.

They came from area codes in Alabama, California, and New York. None of the callers left a voicemail except for the one above, which was made using a Pennsylvania number. One member of /b/ also started a Twitter account @rueryuzaki11 (which has since been suspended) and began spamming the Daily Dot with horrific images and violent threats.

Looking back now on all the various forms of backlash my 4chan stories have created, there’s one thing that separates the Charles saga from the rest: the human connection. Since September, /b/ has set its sights on corporations and celebrities—all of which the community has little to no personal connection to. Charles is different. He’s real.

Since /b/ began its crusade to have Charles meet Gomez, Swift, and the Jonas Brothers, he has been tweeting away, going along with the fun.

Chances are, Charles, or whoever hides behind his avatar, will never escape his presumed life of mediocrity or make A-list friends. But that doesn’t matter. For almost two weeks, Charles was the most talked-about man on one of the top 900 most-visited sites online. And they’ve given him the best sort of friends a person can have—the kind willing to kick a hornet’s nest on your behalf.