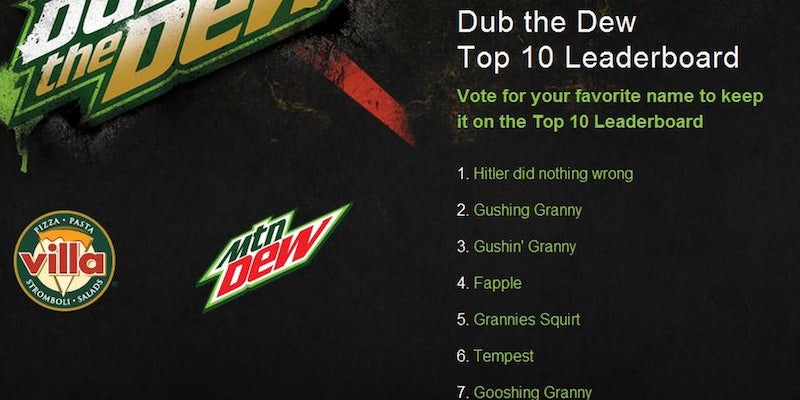 All PepsiCo wanted was to get the Internet community to come up with a clever new name for a Mountain Dew flavor.

Instead what they got were names like “Gushing Granny,” “Fapple,” and “Hitler did nothing wrong,” thanks to some 4chan pranksters.

Sometime late Sunday night the 4chan imageboard community hijacked a Mountain Dew contest where people could submit names for a new drink for a chance to win a digital camera. In what was called “Operation: Gushing Granny,” 4chan users allegedly flooded Mountain Dew’s “Dub the Dew” contest with suggestive titles and eventually crashed the contest site.

The official site was still down as of noon ET but a mirror to the original has been created. In total, it appears the 4chan community created about 510 different contest submissions.

“Too much fun, you’d think companies would just expect this shit by now,” festerchuck commented on Reddit.

“Just wait. Sooner or later, one company will just say ‘Fuck it, print it.’ And people will freak,” bob105 added. “Then, I bet their sales will spike.”