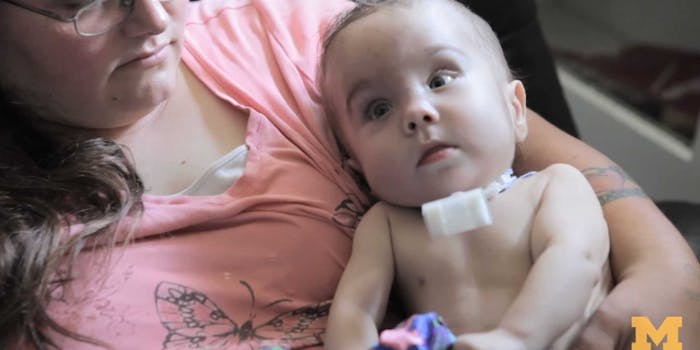 We've extensively covered 3-D-printed products that can take away someone's life. Here's an item that actually saved one.

We’ve extensively covered 3-D-printed products that can take away someone’s life. Here’s an item that actually saved one.

On Thursday, two University of Michigan doctors sent a letter to the editor of the New England Journal of Medicine detailing how they saved the life of infant Kaiba Gionfriddo using the still-emerging technology.

The child suffers from tracheobronchomalacia, a rare condition—just one in 2,200 newborns has it—in which the bronchus collapses and in turn prevents airflow into the lung. When Gionfriddo was 6 months old, he started turning blue while he and his family were out at a restaurant. He was hospitalized and a breathing tube was placed in his trachea.

On Feb. 9, 2012, after receiving clearance from the Food and Drug Administration, Dr. Green and Dr. Hollister surgically inserted the splint, which was created and designed using a CT scan of the child’s trachea and bronchus. The surgery was successful.

“It was amazing,” Dr. Green said in a University of Michigan press release. “As soon as the splint was put in, the lungs started going up and down for the first time and we knew he was going to be OK.”

Dr. Hollister noted that they chose to manufacture the splint from polycaprolactone for a specific purpose.

“The material we use is a nice choice for this. It takes about two to three years for the trachea to remodel and grow into a healthy state, and that’s about how long this material will take to dissolve into the body.”