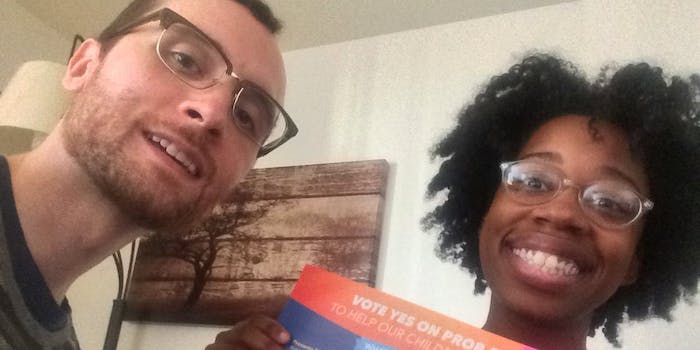 Behind ’25 Minutes of Silence,’ the quietest podcast on the internet

One of the most innovative podcasts available online contains, at its core, absolutely nothing. It’s a blank canvas that never gets painted. All that anchors 25 Minutes of Silence is a brief introduction to its guest.

“[Maddox] and I had a long conversation about what it takes to be successful as an online content creator, and he really opened up to me about his past and his creative process before we started recording,” proclaims the second episode’s summary of a show where two people then spend the next 25 minutes not saying a word to each other.

Creator Joey Clift is teasing listeners, much like he did when he trolled the Garfield Twitter account on national Lasagna Day. That’s because 25 Minutes of Silence is more about where Clift is coming from than the journey he’s taking listeners on.

Originally from Washington, Clift moved to Los Angeles upon graduating college, his hopes and dreams set on a career in comedy. One of the best ways to break through and get noticed? Podcasts, of course.

Clift is slaying it in silence and his guests seem to agree. As of this writing, he’s had six luminaries sit in silence with him. Everyone from O.G. internet shitkicker Maddox to Presidents of the United States frontman Chris Ballew have taken the bait.

Given the promotional opportunities on more traditional podcasts, sitting in 25 minutes of silence used to be a pretty hard sell for guests, until the more artsy comparisons started rolling in: John Cage’s silent tour-de-force “4’33” and Marina Abramović’s iconic “The Artist Is Present.”

25 Minutes also subscribes to an analog rule still used in podcasts. Despite the portable medium, rarely do guests phone in for an extensive interview. Thus, Clift finds it imperative that the guests he picks spend their 25 minutes with him in person.

“I had a 15-minute phone conversation with one of the top third-party presidential candidates a few weeks ago where they agreed to be a guest on the show only if they recorded the show intro and show outro but didn’t actually sit with me in silence for 25 minutes,” Clift recalls. “I told them, ‘No deal.'”

Clift instead tapped another candidate, occasional Daily Dot contributor and Transhumanist Party candidate Zoltan Istvan, who readily agreed to Clift’s stipulations and will be appearing on the show quite soon. Also on the docket is Regular Show writer Gina Ippolito. If some guests get their way, they’ll be making a return trip to 25 Minutes of Silence sooner rather than later.

For creative, promotion-driven guests, a podcast appearance sounds purposeful and allows for the act of quiet time in a typically hectic schedule. It’s not something most people plan for themselves and, in such a hyper-productive, hyper-visible society, not exactly something easy to justify.

Clift and writer/actor Diona Reasonover took the time to work on a jigsaw puzzle together. Ballew spent his 25 minutes packaging albums that benefit a charity he’s especially passionate about.

“I think people love doing the show because it’s relaxing and productive to just sit quietly with another person with no pressure to communicate or impress,” Clift explains. “People never do that for themselves and after just about much every episode, the guest always asks if I’ll let them on the show again because they loved that I was giving them the time to meditate or work on their screenplay or whatever.”

In that regard, the first episode proved to be especially revelatory. “There was a point, five minutes into recording my first episode, where my guest and I both slouched on her couch and replied to e-mailed on our phones. No one was trying to be funny or impressive or portray themselves as something we weren’t,” Clift says. “We were just two people sharing the same space with zero expectations of each other. There’s a weird zen and honesty about that that is amazing to me and I hope translates to the show.”

25 Minutes of Silence has been a rousing, inaudible success for Clift, who’s already knocked the goal of nabbing a presidential candidate off his list of dream guests. Ideally, he’d love an astronaut to embrace the hushed chill of his podcast, or maybe Jeff Goldblum, or Grumpy Cat. Clift is also looking to take 25 Minutes of Silence to the stage and currently eying comedy venues in Los Angeles.

If you’re into Clift being non-silent, he also co-hosts a wrestling podcast with his sketch group Local Business Comedy titled You Should Love Wrestling. He’s written for Cartoon Network, Nerdist, and Maker Studios.

“I’m also writing and producing a complete stand-up comedy album from Batman’s the Joker that should be out in the next few months, assuming DC doesn’t ask me to stop,” Clift says. “That and this podcast have been the two dream projects I’ve been obsessed with all this year.”

Update 11:50am CT Oct. 18: This piece has been updated to reflect the fact that Transhumanist Party candidate Zoltan Istvan readily agreed to do 25 Minutes of Silence. Clift was in correspondence with an additional candidate who was more reluctant.