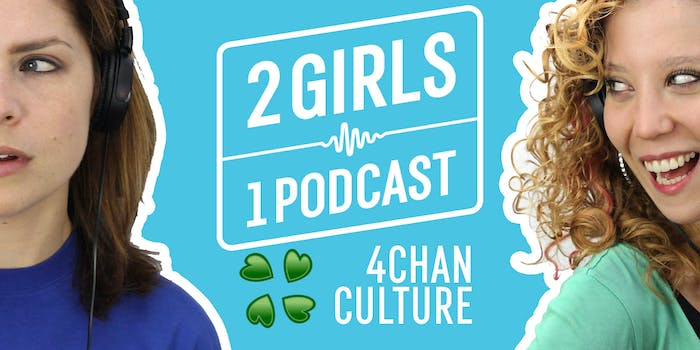 The birthplace of all memes.

4chan is often maligned by the media and mainstream culture as a hive of hate speech and hackers, but it’s far more complex.

4chan culture is unique for its anonymity, ephemeral content, and un-challenged free speech, which often birth viral memes and hilarious crusades weeks before they reach Reddit or Facebook. 4chan’s ability to mobilize real-world action against injustices like animal and child cruelty is also well documented. So how does this massively popular message board fit into a world where so much of the internet has moved on to slick apps and personal profiles?

On this week’s episode of 2 GIRLS 1 PODCAST, Alli and Jen talk with Brendan, an avid 4chan user who has been part of the site’s culture since 2012. He explains why free speech is its most important value, its users’ various social justice crusades, irony in a world of anonymity, why supporting Trump was mostly for the lulz, and why gender doesn’t matter when you’re an anonymous wall of text.