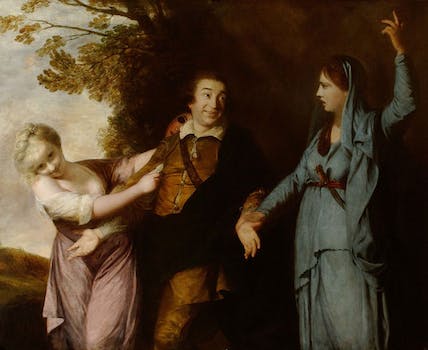 This 18th-century painting looks like the Distracted Boyfriend meme

Yes, we’re still talking about the Distracted Boyfriend meme several months into 2018. (Sorry.) The latest viral tweet about the meme compares the popular stock photo, which shows a man checking out another woman while walking down the street with his girlfriend, to an 18-century painting by Joshua Reynolds. The painting depicts the actor David Garrick torn between two women, who represent tragedy and comedy. Both the image in the painting and the message itself—the struggle of a person being pulled in two directions—are remarkably similar to the meme. The Distracted Boyfriend meme, of course, is often used to show a person being distracted by a person or thing while neglecting something else.

Twitter user @ELXGANZA discovered the old painting and declared it an 18th-century Distracted Boyfriend meme in a tweet on Monday, Clearly, everyone agreed.

Fun fact: the painting is by Joshua Reynolds and it depicts the actor David Garrick stuck between the alure of Comedy and the prestige of Tragedy, so here’s a depiction of how the meme would have worked in its original context. pic.twitter.com/1GDCFM0wXe

Even the expression of the woman in the painting is eerily similar to that of the model in the stock photo:

The painting is just another reminder that our modern-day memes are not that original. A few days ago, another person on Twitter found a 1921 comic that looked exactly like the “What you think you look like vs. what you actually look like” meme. All of our meme ideas are recycled.