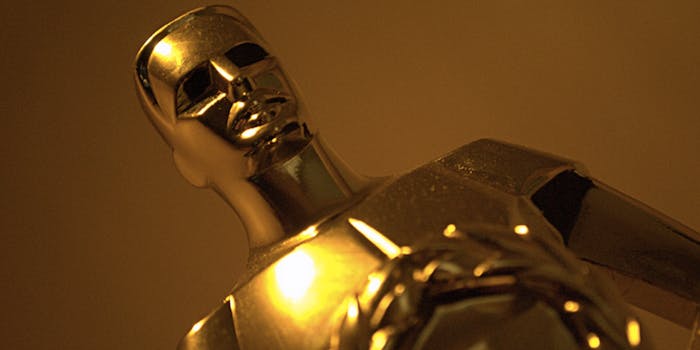 Hollywood’s biggest night, the Academy Awards, is here. That means actresses in colorful, expensive dresses, actors in various versions of virtually the

same tuxedo, and, yes, a bunch of gold statues will be handed out in order to honor some of the

greatest achievements in film this year.

Room to the bombastic and kick-ass Mad Max: Fury Road. These films were generally met with

high praise, but art is subject to opinion, and in the age of amateur reviews on the Internet,

people can always express those opinions—no matter how illiterate or stoned they may be. We decided to take a look at some very real one-star reviews of this year’s Best Picture nominees on Amazon.

understandable but, by most accounts, entertaining. The film boasts an incredible ensemble cast

and currently boasts an 88 percent on Rotten Tomatoes. However, that didn’t keep Amazon user

rwx from stating his differing opinion on the matter, which mostly boils down to his distaste for 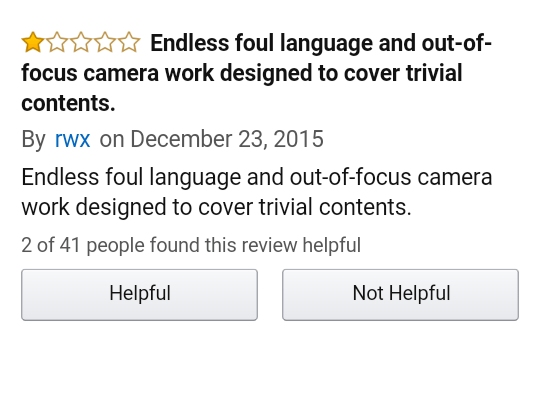 In all likelihood, this is the film that will likely finally see Leo get his sorely deserved Oscar, mostly because he did kind of have to get raped by a bear. “As starkly beautiful as it is

fuel for an absorbing drama that offers punishing challenges and rich rewards,” was the

general critical consensus for this film. Amazon reviewer dennis did not agree. 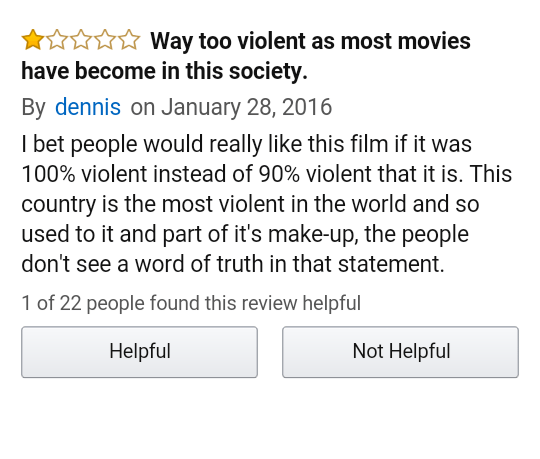 Some 92 percent of audiences and critics reported loving Ridley Scott’s space epic, which let Matt Damon do what he does best: become the subject of an expensive rescue mission. But there are people like Amazon user 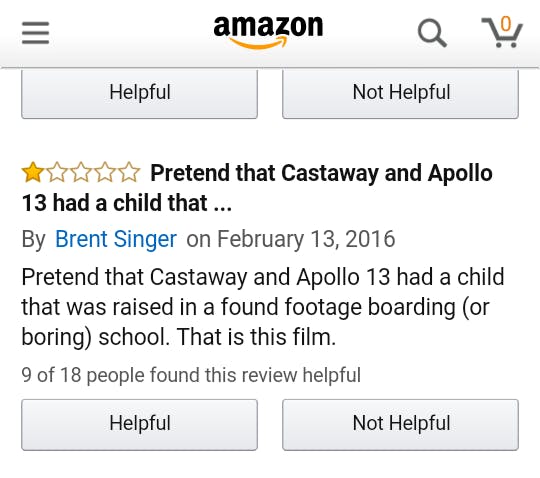 Speaking of Tom Hanks… he was in Bridge of Spies, and even though the film has about as good

a chance of winning as Leo did up until this year, it’s considered by most to be competent. It’s Spielberg! How bad can it be? (Assuming we ignore Kingdom of the Crystal Skull, that is.) Well, according to Andrew Polk, it

makes for a great sedative. 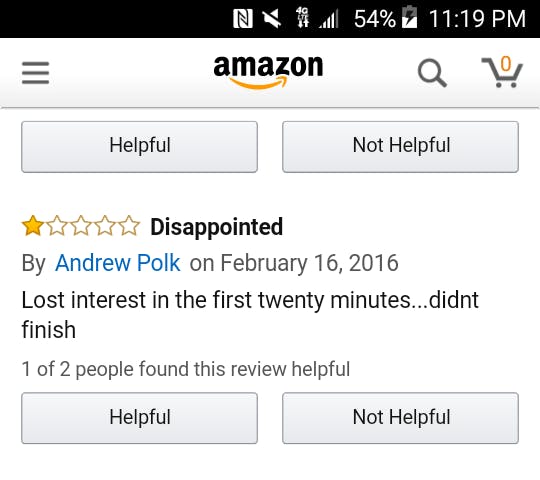 It doesn’t necessarily matter that Brooklyn is not going to win Best Picture. At the end of the

day, it has a 98 percent on Rotten Tomatoes, because according to critics, “Brooklyn buttresses

tugs at the heartstrings as deftly as it satisfies the mind.” Seriously, how many movies get to

bring out the word “buttresses” in a review? Nevertheless, Brooklyn got an all-caps “LAME” and then some from Steven Carrier. 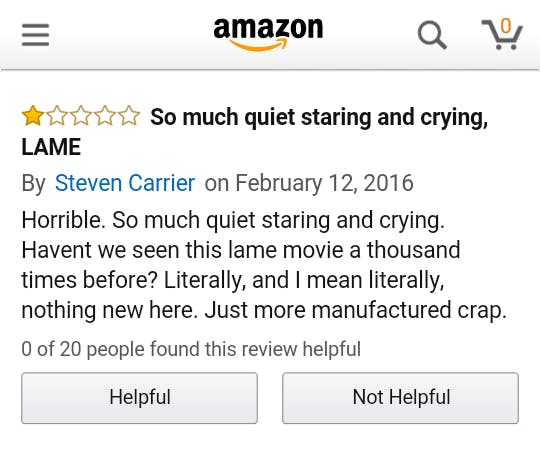 Typically, a movie will get a lot of points for a knockout performance. This is most definitely the case with Room, as Brie Larson has been the talk of the town ever since

this film came out, and she is almost certainly going home with an Oscar. That 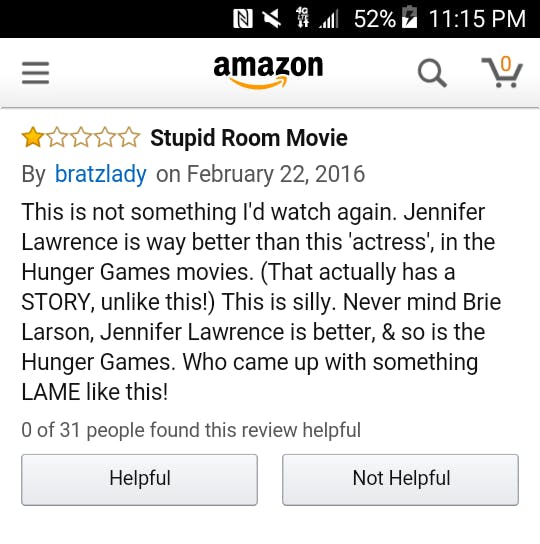 to lionize its heroes, resulting in a drama that honors the audience as well as its real-life

subjects.” At least that’s what most critics thought, and it’s

easy to see why. The film has the best ensemble cast of the year, and who doesn’t

like a ripping story about pedophile priests now and again? Amazon user Kjarkent, that’s who. 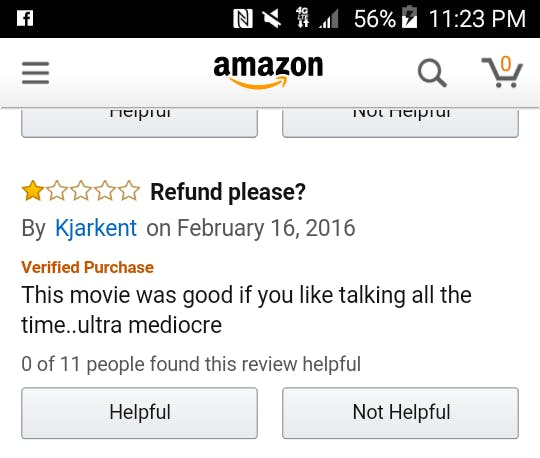 Last but far from least, we have Mad Max: Fury Road. It is so incredibly rare that a

movie like this ascends from the pit of critical snobbery and winds up garnering such acclaim. Fury Road actually wound up being the most beloved film of 2015. It’s straight

up balls-to-the-wall action, it’s a feminist achievement, and lots of shit blows up. What’s not to

like? Not surprisingly, plenty of Amazon reviewers had answers for that. 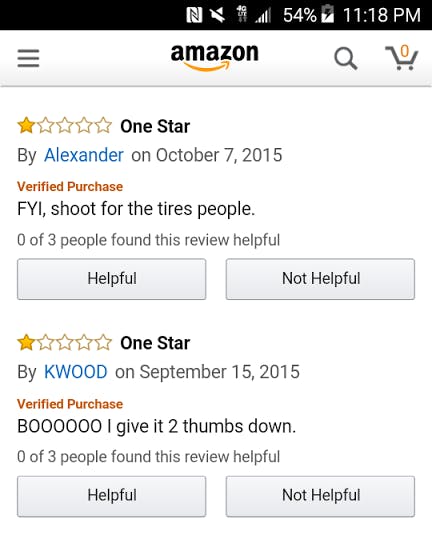 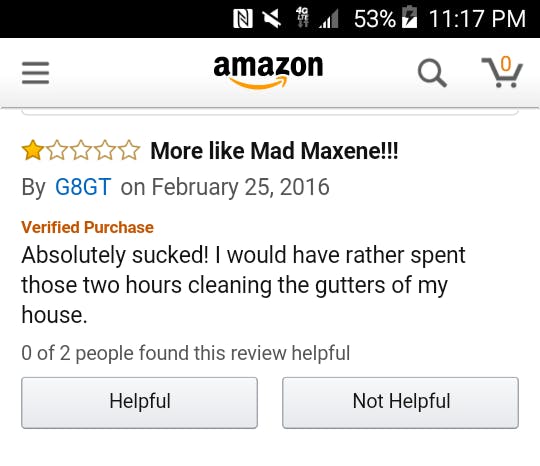 The lesson here? It’s OK to be wrong—even on the Internet.