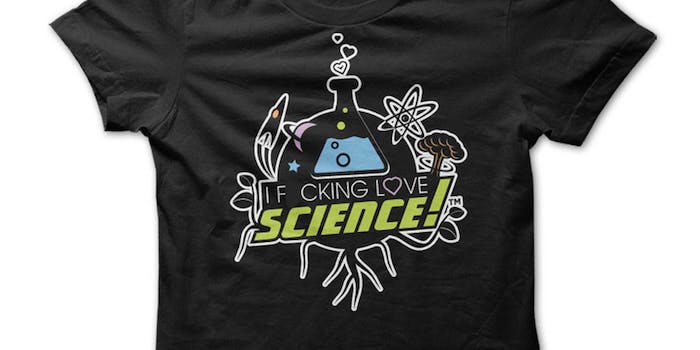 A Scientific American blogger has accused a rising star of building her Facebook empire on stolen images.

There’s high drama today in the world of populist science Facebooking. A Scientific American blogger has accused a rising star of building her Facebook empire on stolen images, then profiting from the results. It is, in many respects, a story as old as the Internet—but one that’s only recently arrived on Facebook, the social network that’s supposed to be about meaningful connections among friends and loved ones, but that is quickly becoming one of the world’s premier platform for content theft and spam.

If you have a Facebook account, chances are you’ve seen a an “I Fucking Love Science” photograph pop across your newsfeed. Curated by the Canada-based self-made social media celebrity Elise Andrew, the page’s popular pro-science posts propagate across Facebook faster than a Neil DeGrasse Tyson quote on Reddit.

Andrew’s populist message and her bite-sized chunks of scientific factoids appeal to the dormant science nerd in everyone: More than 5 million followers have flocked to her page since she founded it less than a year and a half ago. A single I Fucking Love Science image often receives more than 20,000 likes and countless shares.

One of those recent photos belonged to Alex Wild, a Scientific American blogger and entomologist who takes stunning photographs of insects—the kind of image your average Facebook science fan loves to click “like” on.

Wild didn’t take kindly to his photo’s guest appearance on I Fucking Love Science. Andrew didn’t ask him permission, nor did she give him credit. For her millions of fans, “I Fucking Love Science” was the only name associated with the photograph. So Wild decided to do a little study: Just how much of that page’s content is uncredited?  A lot—59 percent of the page’s most recent 100 photographs had no credit at all. Only 26 percent of the posts gave credit to the author.

She’s making a budding business out of her impressive influence—she sells “I Fucking Love Science” T-shirts, and makes television appearances.You get the feeling that Andrew is poised for a breakthrough, and she deserves a lot of credit. She doesn’t own any of the images she posts, which means they’re out there on the Internet for anyone to find and post to their own Facebook accounts.

But Andrew is the only one sitting at the top of the Facebook heap. She’s smart, witty, and tireless. She’s talented at what she does—and, honestly anyone working to pierce the world’s apathy for science deserves a good bit of praise.

“The people who actually made the content that drives Andrew’s ascendant business- the professional scientific illustrators, the photographers, the cartoonists, the graphic designers- aren’t given anything in return. They aren’t paid. They aren’t acknowledged. They aren’t even asked.”

Andrew hasn’t made a public statement about the allegations, but she has started adding credit to photographs. That still doesn’t make them legal (she still doesn’t own rights to the photographs), but it is certainly a step in the right direction.

Wild suggests that’s best for everyone: “The creative community and IFLS are perched very near the brink of a mutually beneficial relationship,” he wrote, suggesting that a tighter relationship could scientists with exposure and Andrew’s with even better content.

We’re rooting for a happy resolution to this conflict. But in the meantime, there are dozens of other massively popular Facebook pages that operate on a similar model of image theft. We chronicled one of these spam empires, Stylish Eve, earlier this year, showing how the group’s network of Facebook pages used stolen images to direct millions of followers to content-free Web pages loaded with advertisements. It’s the same story at many other pages across Facebook. The problem will only get worse when Zuckerberg et al. launch their much-hyped news feed redesign, which will give further primacy to visual content.

It’s against Facebook’s rules to post an image you don’t own or have permission to use. It’s easy to imagine that on a site as big as Facebook, image theft simply goes unnoticed, lost in the endless noise of one billion chatty users. But hidden in this story is an anecdote that suggests Facebook isn’t just well aware of the problem, it’s also not interested in taking meaningful action to end it.

In January, Facebook deleted every infographic that Andrew had stolen from Hashem Al-Gahili, a Yemeni scientist who makes the images in his spare time. Al-Gahili recounted that, at the time, a Facebook staffer told him the company had received “over 6,000 reports on copyright infringement against IFLS in 2013 alone.”

If Andrew’s page receives so many complaints, why hasn’t it been banned outright? Earlier this month Facebook banned one mom for posting a single breastfeeding photo. But 6,000 complaints bring little less than a slap on the wrist.

Perhaps those 5 million fans have something to do with it.